Sidney and Ghostface Return for a Fifth Scream

It’s hard to imagine a Scream without the late Wes Craven at the helm. While he did introduce Freddy Krueger to the world with A Nightmare on Elm Street, and while films such as The People Under the Stairs, Red Eye, and The Serpent and the Rainbow have their devoted followings, the four-film Scream series is the celebrated filmmaker’s most consistently entertaining endeavor. Along with writer Kevin Williamson, it is Craven’s crowning achievement, and now that he’s gone, I can’t say I was excited when a fifth entry was announced as going into production.

Many of my worries proved to be unfounded. Placing the series in the hands of Ready or Not directors Matt Bettinelli-Olpin and Tyler Gillett – a.k.a. Radio Silence – was the first solid choice. The second was making sure this was a direct sequel to Scream 4, screenwriters James Vanderbilt (Zodiac) and Guy Busick (Ready or Not) cleverly building on that 2011 entry’s foundation in ways that are moderately inspired. Best of all, the return of survivors/heroes Sidney Prescott (Neve Campbell), Gale Weathers (Courteney Cox), and Dewey Riley (David Arquette) feel genuine, their placement inside this new tale thankfully justified.

Not to say my overall reaction isn’t sadly on the mixed side of the equation. As well-plotted and as engaging as much of this might be, as captivating as a couple of the new characters are, and as refreshingly brutal as almost all of the kills end up being, I wasn’t always fully engaged in what was happening during this fifth installment. While the pointed jabs at toxic fandom and franchise culture are spot-on, they can’t help but oddly mirror some of the same observations which were made in Scream 4 a decade ago.

This makes the film feel less prescient and not nearly as forward-thinking as any of the other entries in the series have proven to be over time. If anything, when the reveals come, they end up being a tad underwhelming. The motivations that have pushed this Ghostface killer to unsheathe their knife and start slicing and dicing a new crop of characters in hopes of catching the eye of Sidney, Gale, and Dewey don’t pack much of a punch. Worse, the identity reveal made zero impression on me, and no matter what any of my small nitpicks might be with either Scream 2, Scream 3, or Scream 4, that doesn’t happen to be one of them.

Don’t misunderstand me. I still enjoyed myself while watching Scream. Even if it does lamely have the same title as the classic 1996 initial entry in the series – a delightfully silly meta-joke made within this sequel itself, it should be noted – Bettinelli-Olpin and Gillett do pull out all the stops as far as their sinisterly thrilling staging of all the key set pieces is concerned. Ghostface hasn’t been this deliciously vicious since Scream 2, and the sudden ruthlessness of their attacks is suitably shocking.

The other item of note is the introduction of the two primary new characters, estranged siblings Sam Carpenter (Melissa Barrera) and her younger sister Tara (Jenna Ortega). Both Barrera and Ortega are outstanding, and the reasons behind why they haven’t seen one another in five years work amazingly well. The pair have incredible chemistry, all of which makes the joy and the pain of their reunion during such perilous circumstances all the more palpable. Better, because I began to care about them so deeply, I both wanted each young woman to survive and was moderately curious if that meant one of them was going to end up being behind this latest Ghostface killing spree.

Don’t expect any clues to the answer to that question from me. Heck, I’m not even going to give much of a plot synopsis. All I’ll say is that a new Ghostface has decided to descend upon Woodsboro, and a fresh set of teenagers including Tara, siblings Mindy Meeks-Martin (Jasmin Savoy Brown) and Chad Meeks-Martin (Mason Gooding), Wes Hicks (Dylan Minnette), son of former Deputy, now Sheriff Judy Hicks (Marley Shelton), Liv McKenzie (Sonia Ammar), Vince Schneider (Kyle Gallner), and Amber Freeman (Mikey Madison), are all in the killer’s crosshairs. Once bodies start dropping, Dewey, Gale, and finally Sidney believe it’s their duty to get involved.

Look, I liked Scream. I had a lovely time watching it. I was also not anywhere near as enamored with the film as I have been the previous sequels, most notably Scream 2 and Scream 4. This fifth installment has a lot of terrific moments. It also has its fair share of underwhelming ones. While Bettinelli-Olpin and Gillett certainly do Craven’s legacy proud with their confident and blood-smothered continuation of the story, they also don’t take it anyplace I found surprising. It didn’t slay me, and considering we’re talking about Ghostface here, that turn of events can’t help but be at least somewhat disappointing. 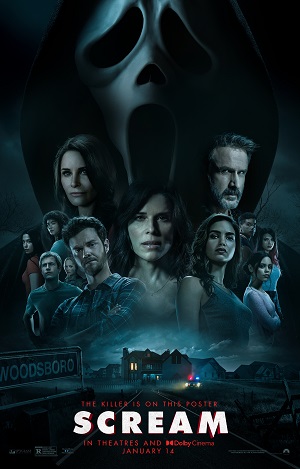