Sparse Settlers a Thrilling Sci-Fi Journey into the Unknown

In a remote corner of Mars, colonists Reza (Johnny Lee Miller), Ilsa (Sofia Boutella) and their daughter Remmy (Brooklynn Prince) diligently work their small farm. They are isolated and alone, so it comes as a surprise when they awaken to a threatening note scrawled across their kitchen window ordering them to leave.

Jerry (Ismael Cruz Córdova) has traveled through a desolate wasteland to return to a homestead that once belonged to him. He can only assume the family now residing there took it by force from his parents. While Jerry would rather refrain from violence if he can, there’s nothing he will not do to reclaim ownership of this land.

A quiet, introspectively sparse sci-fi thriller, Settlers makes a lasting impression. Viewed almost entirely through the eyes of Remmy, first as a nine-year-old witnessing the conflict between her parents and Jerry, then roughly a decade later as a young woman (now portrayed by Servant star Nell Tiger Free) dealing with the cruel realities of her current situation, this is an intelligently thought-provoking drama that kept me on my toes.

Writer-director Wyatt Rockefeller uses this setting to explore complex themes involving immigration, gender dynamics and climate change, challenging the audience to mull a bevy of difficult questions while at the same time refusing to offer up any easy answers or simple solutions. There is a tragically evanescent ambiguity to the narrative reminiscent of genre favorites like Silent Running or Phase IV, Rockefeller steadfastly declining to take the easy way out as his narrative builds to its suitably open-ended conclusion.

Things primarily revolve around Ilsa, Remmy and Jerry, the trio virtually forced to form an uneasy alliance. The two adults warily tiptoe around one another, each understanding they need the other to survive even though they’d like to achieve the upper hand against their potential adversary if the opportunity to do so were to arise. They also vie for Remmy’s attentions and affections, Ilsa and Jerry understanding she’s the key component who can give them an edge against the other as far as current power dynamics between them are concerned.

All of which makes Settlers something of a major showcase for the shockingly talented Prince. As great as she was in The Florida Project, it’s been a blast watching the child star grow and evolve at such a young age and in such a short period. Rockefeller asks a lot of Prince, the majority of the emotional heavy-lifting falling almost entirely upon her shoulders.

The flashes of humor and levity? That’s on Remmy, her burgeoning relationship with a robot farmhand (reminiscent of Huey, Dewey and Louie from Silent Running) she nicknames Steve charmingly effective. Moments of darkness and tragedy? That’s mostly on her as well, the scenes where she learns a chilling truth about the farm and how it relates to the outside world delivered with a hushed restraint that’s stunning.

Through it all, Prince imbues her performance with courageous resilience, showcasing a stoic gracefulness that Free picks up on and makes her own during the film’s climactic third. These later portions twist and turn all that transpired during the first few acts. Remmy’s plans, her dreams and desires, they all have been bubbling underneath the surface of her skin just waiting for the perfect moment to burst into the open, Free adding a layer of purposefully pointed energetic bravado to the character that’s wonderful.

There are elements I didn’t connect with. While Boutella is excellent, some of Ilsa’s choices still rubbed me the wrong way. Rockefeller has her walk along a knife’s edge in the shape of a corkscrew, and as such the array of ups and downs she goes through are understandably extreme and not always believable.

As for Jerry, I’d love to get into discussions about his character with other viewers. His tale has so many tumultuous ups and downs it would be fascinating to learn how many consider him to be the villain and those instead who see the young man as a conflicted lost soul who does a poor job of explaining the dire nature of their combined situation to Remmy or Ilsa. Cordova has to navigate an incredibly tight channel to bring all of this across, and while he isn’t entirely successful, watching him make the attempt is still frequently exhilarating.

There’s a lot to love about Settlers. Rockefeller continually tests his audience. Not everything he does connects, some of the pieces do not fit together and the final scenes are something of a foregone conclusion. But I was captivated with every step Remmy took, and it was thrilling to see her take charge of a situation she initially had zero control over. Give this one a look. 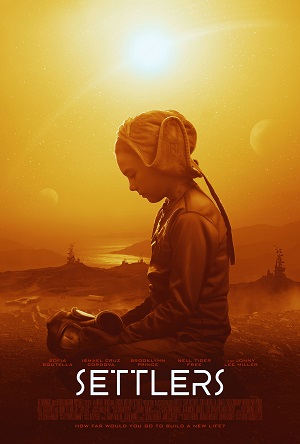