The story Decker and Gubbins are presenting is a fictionalized what-if accounting of what could have transpired between author Shirley Jackson (Moss) and her Bennington College English professor husband Stanley Hyman (Michael Stuhlbarg) during the period she wrote her second novel Hangsaman. The pair are currently sharing their home with Stanley’s newest teaching assistant Fred (Logan Lerman) and his pregnant wife Rose (Odessa Young), the latter not-so-subtly coerced into keeping tabs on Shirley while she also cleans and maintains the house.

That’s all a viewer needs to know going into this one. Decker concentrates on Shirley’s two key relationships, the first being the fracturing, cantankerous, mutually combustible and codependent one with her husband Stanley, the second the nervy, sensuous, explosive and eventually loving one between the author and Rose. There are no real rules as to how the various interactions between these individuals will play out. There are no easy answers as to the questions that arise as they all navigate their way through the numerous emotional minefields they need to navigate their way through to find some semblance of safety.

Decker maintains a razor-sharp focus on Shirley. While Rose is slightly more of the primary figure through whose eyes we see key events play themselves out, there is never mistaking that this is the author’s story start to finish, beginning to end. She is the catalyst everyone else must deal with. She is the lioness curled up in the center of the den waiting to strike and smother her prey at a time of her own unknown choosing.

This allows for a constant aura of unease to settle atop the proceedings that’s purposefully discombobulating. I could never get my bearings and my feet rarely felt as if they were resting atop solid ground. Like Rose, I found Shirley difficult to embrace. She is a prickly enigma battling demons of the id as well as ones brought on by her conflicted relationship with her husband, and while her literary genius isn’t in question, these mental imbalances make the author an unpredictable personality impossible to pin down.

But once trust was attained, once an understanding as to the hows and whys of Shirley’s constantly shifting emotional interiors could be partially ascertained, a fiercely personal connection began to form. Again like Rose, I could understand what was happening in ways that took me by surprise. A mutual affection began to form, a passionate bond that went beyond sisterly to the point it bordered on a heady mixture of lust, compassion, friendship and even love.

There’s something magical watching Moss weave her incisively ferocious spell. Much like her spellbinding work in Her Smell, Queen of Earth and The Invisible Man, the actress achieves a level of unbalanced mental strain that’s so lived-in and authentic watching her is breathlessly earthshattering. This is a titanic portrait that digs inside the mentally unhinged cracks and cervices that make up the foundation of Gubbins’ adaptation to the point I was in constant awe. Moss is electrifying, the jittery specificity of what she accomplishes nothing less than stunning.

Don’t sleep on Stuhlbarg. He brings a definite Who’s Afraid of Virginia Woolf? vibe that’s disquietingly upsetting. He exudes charm. His smile is warm. He comforts with a soothing solemnity that’s almost hypnotic. But Stanley is equally conniving, his apathetic condescension for Fred dripping with a jovial acidity that’s seductively terrifying. The moments where Stuhlbarg and Moss share the screen are an exquisite battle of wills where the victor is always a frigidly uncomforting mystery, the professor’s selfish toxicity only augmenting his wife’s mental illness just as he tries to convince friends and coworkers he only has Shirley’s best interests at heart.

Shirley Jackson’s writing speaks for itself. She is justifiably celebrated, the horrors she so insidiously documents all due to the human condition, each created by how people interact and how the words they leave unsaid can come back to haunt them with chillingly tragic vitriol. Decker’s Shirley paints the author with an insightfully lush and vibrant brush, her relationship with Rose allowing for a level of empathetic understanding that makes enduring all those ethereal metaphorical ghouls, ghosts and demons magnetically worthwhile. 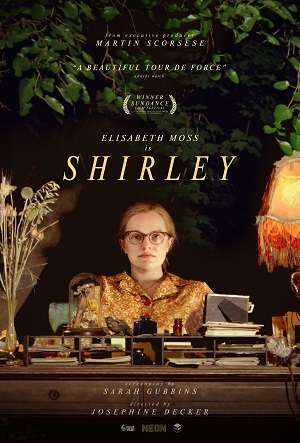