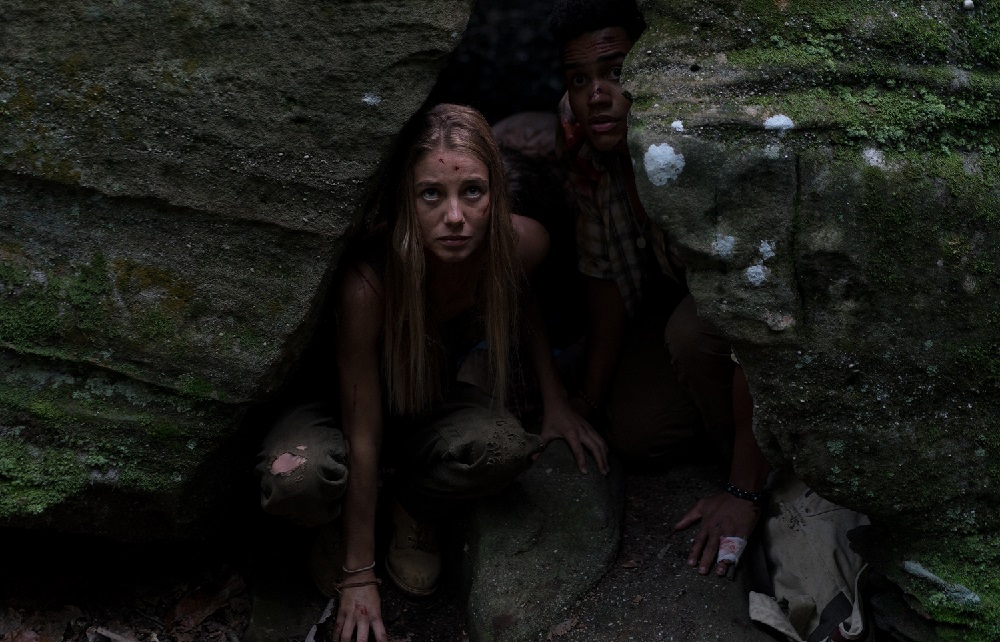 Scott Shaw (Matthew Modine) has come to a tiny Virginia town located just off of the Appalachian Trail in search of his daughter Jen (Charlotte Vega). Six weeks ago, she and a group of her friends, including her boyfriend Darius (Adain Bradley), set out on a hike and were never heard from again. Scott is certain something bad has happened. But he also knows his little girl. Jen would do whatever it takes to survive, and Scott is going to find her no matter what the odds of his doing so might be.

Don’t let the presence of screenwriter Alan McElroy fool you, director Mike P. Nelson’s (The Domestics) survivalist horror yarn Wrong Turn doesn’t have much in common with its same-titled 2003 predecessor or the five increasingly gory direct-to-video sequels that followed it. This is more a top-to-bottom reinvention than it is a remake or a reboot. Yet, this new version could easily exist in the same world as its Appalachian counterpart, the only thing separating the older series from this film being the state line splitting Virginia from its West Virginian cousin.

That’s an important distinction, one that could rile up and anger fans of the previous franchise mainly because of the absence of hungry mutant-hillbilly cannibals. Instead of trotting down those same 2003 trails, McElroy instead crafts something far more grounded this time around. Like some sort of creepy, unsettlingly nasty combination of Deliverance, The Strangers and The Village, this is a brutally uncompromising descent into unflinching terror that kept me on the edge of my seat. There were moments where my heart was beating so fast I worried it was going to burst, everything building to a clever coda I didn’t see coming.

The story is essentially split into two parts: one following Scott as he learns from townsfolk about the dangers hikers encounter if they are foolish enough to stray off of the Appalachian Trail, and the other taking place six weeks prior and showing what sort of trouble Jen and her friends encountered during their wilderness adventure. It’s a little pointlessly convoluted, but not distractingly so, and I never had much trouble keeping track of time and understanding what was happening when.

It helps that McElroy and Nelson know why potential viewers would be interested in giving this new Wrong Turn a look, and that has nothing to do with Modine playing amateur sleuth. No, it is the section focused on Jen, Darius, the rest of their group and their travails once they foolishly leave the trail where all the nightmarish dramatics take place. What they encounter, the traps they unearth and the harsh truths they are forced to learn are depicted with cutthroat ferocity, the true terror hunting them beyond anything they could have imagined beforehand.

Jen stands at the center of all the action right from the start. The young woman is kind, intelligent and selfless. She’s also stronger than she realizes. When one of her friends does something beyond the pale – even when their actions on the surface seem understandable, maybe even warranted – she’s the only one who calls them out. Yet, not long after, Jen also stands up for this person when rolling over and denouncing them would be easier, refusing to pronounce them guilty as charged, even though doing so might save her own life.

Vega makes all of this work with captivating magnetism, which is good, because the remainder of her fellow hikers don’t get much of a chance to do the same. Bradley has the biggest part, but even he disappears for long stretches of the tale, his final appearance not having anywhere near the emotional resonance I can’t help believe was intended. As for the others, while their overall diversity is refreshing, that does not mean any of them are all that memorable, and the only one who does make a lasting impression I don’t want to mention, as this has more to do with the gorily crushing viciousness of their demise than it does with their actual character.

Modine is very good, Scott’s transformation growing on me as things went along. There’s also a tremendous performance turned in by veteran character actor Bill Sage. Problem is, I can’t really talk about it, as that would ruin a whole cadre of surprises and closely guarded secrets McElroy and Nelson do a solid job of concealing for roughly half of their picture’s running time. What I will say is that, once Sage arrives, my blood stopped cold in my veins. Much like his mesmerizing work in the outstanding We Are What We Are and the otherwise disappointing Welcome to Willits, the actor towers above the fray with regal malevolence, and even though it’s January I have a sneaking suspicion I’ll be thinking about him and his character for the remainder of 2021.

Nelson doesn’t pull a single punch, and a lot of this can get unrelentingly bleak. But he stages all the murderous bedlam with confident precision, cinematographer Nick Junkersfeld shooting things with such viscerally kinetic intensity I couldn’t have torn my eyes away from the screen even had I wanted to.

While I’m sure many will miss the mutant hillbilly cannibals of the previous series, for my money this Virginia-set Wrong Turn is the superior backwoods sojourn into mayhem and madness. This remake is a grisly smash, McElroy deserving kudos for only using the basic template of his 2003 success to do something entirely different with the doomed protagonists he sets out on their perilous hike this time around. I ate it all up, the gruesome glory of it all filling my horror-loving heart with glee. 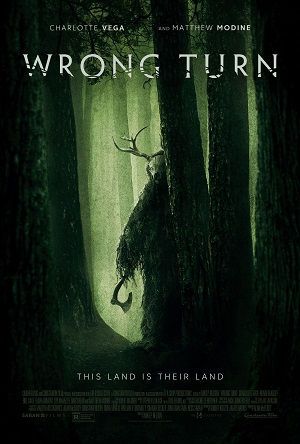