Someone is kidnapping teenage boys. The local kids have nicknamed whomever it is “The Grabber,” and while 13-year-old Finney (Mason Thames) shudders at the mere thought of the inhuman villain, his 11-year-old sister Gwen (Madeleine McGraw) fearlessly badmouths this unknown ghoul at every opportunity. But when he appears to be the next kid taken by this mystery man, she makes it her mission to find her brother no matter what the cost.

Based on the short story by Joe Hill, director and co-writer Scott Derrickson teams up once more with frequent collaborator Robert Cargill to dial up 1970s-set The Black Phone. The pair behind both Sinister shockers hold back the scares to amplify the thrills and chills, delivering arguably the most crowd-pleasing horror flick since Leigh Whannell’s The Invisible Man.

This is a fun, fast-paced little malevolent gem that seductively builds to a slam-bang climax that elicited a bevy of hearty cheers from my preview audience. Better, it deserved them. Derrickson delivers the kick-ass goods, the final act so outstanding I was willing to overlook how some of the more serious moments provoked unintentional chuckles and how a few of the humorous bits brought forth a couple of eye-rolling groans.

Thankfully those reactions are few and far between. Most of the laughs are genuine, and many of the shocks make a vibrant impact on the viewer’s nervous system. Derrickson stages a couple of suspense sequences – most notably one where Finney ponders an escape attempt even though he’s been secretly urged to remain a captive for the time being – that work exceedingly well. He and Cargill also script a humdinger of an emotional moment between Gwen and her depressively drunken father Terrence (Jeremy Davies) not too long after her brother’s abduction that genuinely took me by surprise.

There are two supernatural elements at play, and the film confidently balances them both. The first concerns Finney. The Grabber’s underground lair sports that mysterious black phone of the title. Its chord has been cut. There is no working phone line. Yet, sometimes it rings, and while the Grabber can hear the chime, Finney is the only one who has ever picked up the receiver and spoken with ghostly voices wanting to engage with him in spooky conversation.

The other involves Gwen. Turns out, she has dreams, and frequently they come true. The girl doesn’t know if this is an angelic gift from the heavens above or just some fluke occurrence that keeps her up at night, horrified at all the awful things she psychically bears witness to.

Both of these are important facets of the overarching story, and it’s immediately clear this strange black phone along with Gwen’s visions will play a large role in whether or not Finney survives his encounter with the Grabber. Derrickson moves back and forth between these elements with fluid precision, inching each aspect closer and closer to one another right before the high-octane final ten minutes kicks things into suspenseful overdrive.

Davies is as solid as ever, but Terrence is too underdeveloped for his part of the journey to fully make an impact. But he gets off better than Sinister and Sinister II star James Ransone does. I get why he’s in the film and I understand where his character fits in the proceedings, I just don’t think any of the bits involving him work all that well. Not even the major wallop of a surprise that reminded me of something out of an old-school Stephen King thriller.

Who is terrific is Ethan Hawke. He cuts loose something fierce as the Grabber, reveling in the unhinged lunacy of this psychotic creature of destruction and depravity. Hawke brings this kidnapping murderous magician to life with such jovial bravado that the shudders that went up and down my spine whenever he sauntered into the frame were entirely genuine. It’s a spellbinding treat of a performance, the Grabber’s inhuman villainy a seductively sleazy dance of death I couldn’t help but be enamored with.

As great as the veteran actor may be, however, that’s nothing compared to what Thames and McGraw accomplish. They are otherworldly awesome, both youngsters doing a stupendous job of giving their respective characters an interior fortitude and agency that grows, evolves, and most of all magnifies as events progress. McGraw is particularly outstanding, but it also helps that Derrickson and Cargill give Gwen all the best lines and most of the more memorable moments.

The Black Phone is a perfect example of how to tell a simple, somewhat familiar story with flair, intelligence, and style. Not much unexpected happens, and yet that hardly ever matters. There is some electricity coursing through this film’s wiry frame I could have cared less that I almost always knew where things were going to end up. It’s getting there that proves to be such a blast, answering Derrickson’s call to suspense one of the better decisions I’ve happily made in all of 2022. 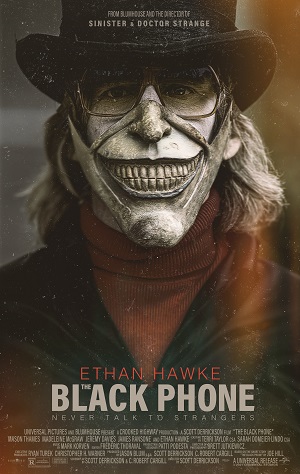