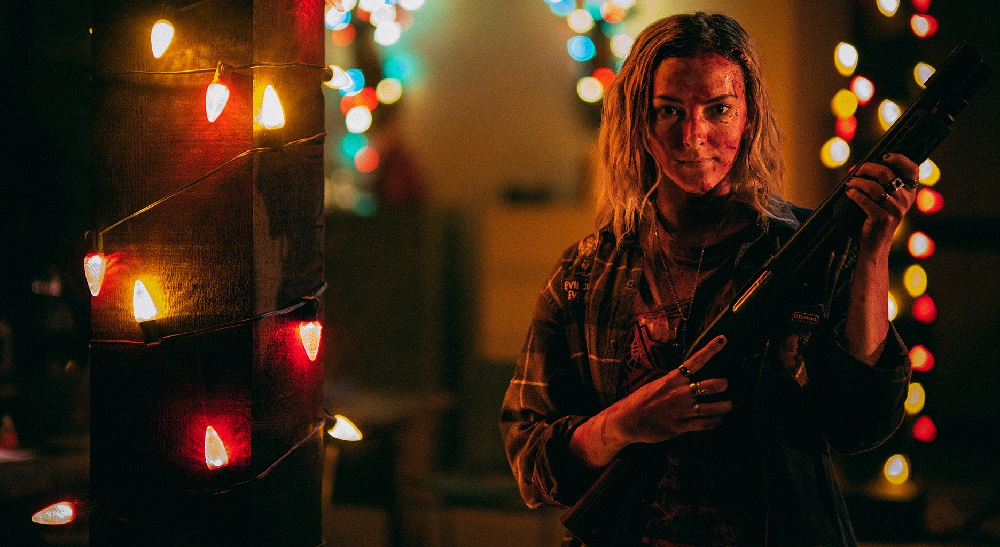 After closing down for the evening, all small-town record store owner Tori Tooms (Riley Dandy) wants to do this Christmas Eve is cut loose, get drunk, and get laid, more or less in that order. Her charming employee Robbie Reynolds (Sam Delich) convinces Tori to spend the evening with him, and the two head out into the snowy night, determined to have a good time.

What they couldn’t have anticipated is that the spiffy new animatronic Santa Claus (Abraham Benrubi) installed at the local toy store — and built with military-grade circuitry — would go haywire. But considering that Christmas Bloody Christmas is the latest low-budget barn burner from writer-director Joe Begos (Bliss, VFW, Almost Human), the robot’s rampage is hardly surprising. This is a gruesome slice of holiday cruelty that knows exactly what it is and doesn’t try to be anything else, and that’s exactly as it should be.

Begos understands that it’s okay to take your time to get to the blood and guts. The filmmaker spends a good third of the 81-minute running time getting to know the characters and setting the Podunk Americana mood. Tori and Robbie are authentically contemporary twentysomethings. They swear like sailors, treat one another as equals, and cut loose as if tomorrow doesn’t matter and today’s experiences are the ones they’re going to remember for the rest of their lives.

Does the director do the same with anyone else? Not really. Maybe with the town’s boozy yet sympathetically courageous lawman Sheriff Monroe (Jeff Daniel Phillips), but I still never felt as connected to him as I did to Tori and Robbie. Everyone else who enters into this maelstrom is just grist for the meatgrinder, and while Begos once again shows proper ruthlessness as to who lives and who dies, other than one notable exception, and unlike the characters in VFW, I can’t say that any of this robotic Santa’s victims generated an emotional reaction on my part.

Thankfully, none of that dilutes the gory fun. When Begos finally unleashes his monstrous Santa Claus, the carnage was worth the wait. This thing is Michael Myers on steroids or a T-800 after a serious upgrade. It is a single-minded, ho-ho-hoing killing machine that will not tire, shows no mercy, and is virtually impossible to stop. Once this Santabot gets Tori in its crosshairs, the only thing it wants to do is chop the young woman to bits with an axe, right along with anyone and everyone who happens to get in its way.

It’s extraordinarily sadistic, and what’s the use in showing one person get graphically cleaved in two when you can dismember a full half-dozen? Begos’ overall aesthetic frequently recalls John Carpenter or Joe Dante, but watching the unrestrained malevolence he typically revels in makes me think his true filmmaking spirit animal is Stuart Gordon. He’s absolutely unafraid of gore. Better, Begos also knows how to use it, as shock, awe, guts, story, and character development go laudably hand in hand.

He has a terrific heroine in Tori, and Dandy gives a rip-roaring final-girl performance that brought a gigantic smile to my face. Whether throwing back shots, dropping f-bombs, or picking up a high-caliber firearm and wielding it like she’s related to Annie Oakley, the actress is an energetic dynamo of motion and enthusiasm. Dandy throws herself into the role, her slippery physicality and angrily terrified athleticism perfectly suited to the bonkers, seemingly never-ending chaos Begos unleashes during the finale.

The film is unrated for good reason. Its plot is simplistic. Side characters basically exist only to get slaughtered. But Begos brings a deranged intensity to his latest horror-action hybrid that fits all of this violent absurdity perfectly. The director remains an unhinged maniac behind the camera, and I’m all for it, Christmas Bloody Christmas a nasty yuletide treat worth savoring. 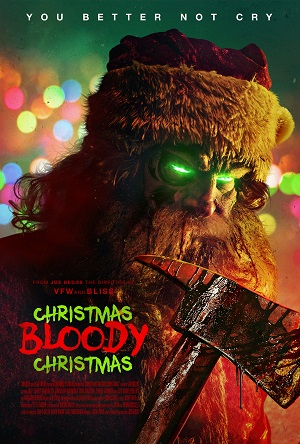