As the hours dwindle and closing time nears, a frantic young woman going by the nickname “Lizard” (Sierra McCormick) rushes into the bar, a pair of massive cretins hot on her trail. When one of them wounds Doug when he tries to play peacemaker, the rest of the gang leap into action, Fred in particular. With an ax, a shotgun and their not-nearly-as-old-as-they-look fists, the group makes short work of the two men, cutting them down with ease.

This is only the start of what is going to be a very long, and very bloody, night for this group of heroes in Joe Begos’ lean, mean and aggressively violent survival thriller VFW. As a follow-up to last year’s psychedelic heavy metal supernatural barnburner Bliss, this might just be the director’s best, most consistently entertaining effort yet. Like a down-and-dirty homage to Howard Hawks’ Rio Bravo and John Carpenter’s Assault on Precinct 13 only with a grizzled elder warrior spin reminiscent of Larry Cohen’s Original Gangstas, this movie kicks major ass, and I pretty much loved every single solitary second of it.

Not that Begos is doing anything new. This is one of those stories where narrative twists are purposefully few and far between. Max Brallier and Matthew McArdle’s efficient script goes entirely as expected. Once we know who the characters are and have gotten the layout of the environment they’re going to defend the screenplay gets right to the assault, eschewing any pointless bells and whistles that could have proven to be a distraction.

Good guys are all former (and one current) soldiers. Young, not entirely helpless young woman enters looking for a place to hide. Evil drug dealer (portrayed with suitably demonic panache by Travis Hammer) sends in a seemingly never-ending cadre of doped-up hellions to kill the men and bring the girl (along with the bag filled of goodies she stole from him) back across the street to his warehouse hideout. Bloodshed and carnage ensue, Fred and the rest of the gang inside the VFW determined to protect Lizard and do whatever they have to in order to survive.

It’s all simple and straightforward, but that doesn’t mean the film is unsurprising or boring. Begos directs with pugilistic conviction. Both he and cinematographer Mike Testin (Dementia) keep the action centralized and camera movements fluid, while editor Josh Ethier (Gretel & Hansel) doesn’t overcut things so that no matter how frantic events might get keeping a visual connection to what is happening to who and where is never a problem. The kinetic intensity of the situation doesn’t subside, Steve Moore’s (Mayhem) spirited score adding just the right accompaniment to everything that’s happening up on the screen at any given moment.

Yet the main reason VFW works as it does has almost everything to do with the collection of veteran actors Begos has assembled for his violent genre action riff. While some are around for only a few minutes, each actor still makes a notable impression. The ease of their camaraderie gives the story an emotional component that makes each death personally affecting. I felt for these guys, and the way McCormick and the younger Williamson ingratiate themselves into this tightknit group made it easy to pass my affections onto both of them as well.

But, make no mistake, as great as the core group are, and as much fun as it is watching all of the actors work together so effortlessly, Lang, Sadler and the elder Williamson steal the show. These three know exactly what they are doing every step of the way, the assertive tenacity of their combined chemistry a thing of poetically vulgar beauty. There’s a reason their careers have lasted as long as they have, and I don’t think any of the trio have lost a single ounce of their collective charisma. Lang is particularly outstanding, the controlled forcefulness of his performance hypnotic in its grumpily perturbed ferocity.

Is it gruesome? Yes. Obnoxiously so? No. Or, at the very least, not nearly as much as it maybe could have been. Begos doesn’t go overboard with the blood and guts, and as impressive as the gore effects are the director doesn’t allow his film to drown in them to the point they overshadow everything else that’s happening. VFW is a cracking thriller, its pulse-pounding theatrics making this an agreeably bruising good time I loved every single gosh darn blood-soaked second of. 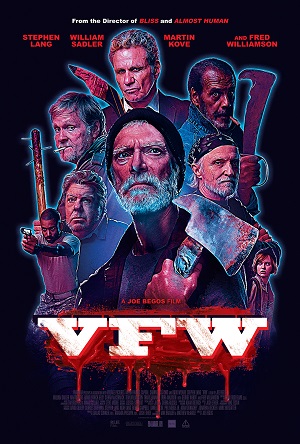