Los Angeles social worker Anna Tate-Garcia (Linda Cardellini) thought she was going out on a normal welfare check when she headed to the home of Patricia Alvarez (Patricia Velasquez) and her two sons. But after she finds the boys locked in the closet and the apartment in a state of chaotic disarray, even though she’s close to the family she has no other choice but to put the kids in protective custody. Later that night they are found miles away from the locked halfway house they were boarded at safe and sound at the start of the evening, both mysterious drowned in a pool near the city reservoir.

It is 1973 and Anna is a single mother grieving over the death of her police detective husband, so this latest tragedy has left her shaken, even more so with Patricia angrily blaming the social worker for her children’s deaths. She violently spews out curses that someone or something called “La Llorona” will come for Anna’s kids Chris (Roman Christou) and Samantha (Jaynee-Lynne Kinchen) and will take them away into a realm of never-ending darkness and despair. Soon strange things begin to happen, Chris and Samantha seeing a weeping woman (Marisol Ramirez) in a wedding dress beckoning them to come close. After turning to the Catholic Church for help, it is suggested to Anna that she seek out a former priest named Rafael Olvera (Raymond Cruz), this man of God now a curandero who makes it his mission to battle the supernatural forces of demonic evil.

Inspired by a real Latin America folktale, The Curse of La Llorona is another entry in the ever-expanding universe of The Conjuring. Following hot on the heels of The Nun, Annabelle and Annabelle: Creation, this little horror offering isn’t without its positives, mostly notably Cardellini’s passionate and emotionally-resolute performance as an aggrieved mother still reeling from unimaginable tragedy and now willing to do whatever it takes to save the lives of her two kids. But there’s little in the way of energy driving this supernatural ghost story, the whole thing often feeling like it is going through the scary movie motions more than it is interested in doing anything imaginative or original. It’s rather boring, and even if some individual moments do strike a suitably unnerving tone this is still a rather forgettable affair difficult to get excited about.

This is a shame. The legend of La Llorona is pretty powerful stuff, this heartbreaking piece of Mexican folklore a mournful parable of loss, betrayal, pain, tragedy and unimaginable grief that’s haunted generations of believers and nonbelievers alike. This story inspired the first episode of the long-running hit television series “Supernatural,” while the character herself has appeared in a number of motion pictures, most notably the 1961 Mexican production La Maldición de la Llorona, also known as The Curse of the Crying Woman.

But the actual heritage of the character and her history feel more like window dressing here than they sadly do anything substantive. I never got the sensation that screenwriters Mikki Daughtry and Tobias Iaconis (Five Feet Apart) saw the character as anything more than a convenient device to help generate a handful of overly theatrical scares. The Hispanic characters in the film don’t have any real dimensionality, not even Patricia or Rafael, all of them filling more of an archetypal need required to progress the story to its climax than anything believably three-dimensional. There’s no sense of authentic history, no sense of cultural significance, the connection linking Anna and her children to this world so tenuous and poorly realized it ends up holding precious little meaning whatsoever.

Director Michael Chaves stages a handful of solid scenes, not the least of which is a rather clever early reveal of La Llorona utilizing a child’s clear plastic umbrella opening and closing in the rain. The Conjuring and The Conjuring 2 composer Joseph Bishara turns in another solid score, his compositions here far more symphonically melancholic and much less boisterous than I initially anticipated they were going to be. I also really liked the performances turned in by child actors Christou and Kinchen, the pair having a solid brother-sister dynamic and I was genuinely moved a couple of times by the selfless way in which they attempted to look out for one another.

Yet as far as positives go, that’s all I’ve got. I will add that after this, Green Book and The Founder I wish that someone, anyone, would give the talented Cardellini a role worthy of her gifts. Even though she throws herself into the proceedings here with intense vivacity, and even though she has a handful of strong moments that hint at the core emotional components the filmmakers obviously wished to explore more fully than they ultimately do, there’s still precious little about this thriller that causes my blood pressure to rise or for my skin to tingle in suspenseful anticipation. The Curse of La Llorona is a massive missed opportunity that failed to maintain my interest, this latest entry in producer James Wan’s spookily successful ghost story universe conjuring up a profound sense of disappointment that left me dejectedly frustrated. 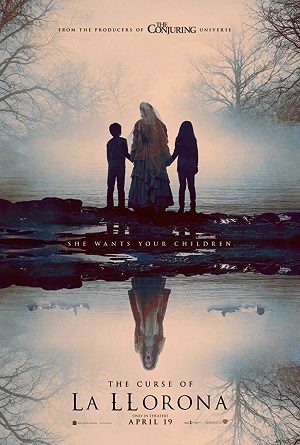