Sarah Fier’s severed hand has been returned to her corpse hidden just outside of Shadyside. A confident Deena (Kiana Madeira) is certain she has ended the curse that has afflicted the residents of her town for generations. Better, she has likely saved Sam’s (Olivia Scott Welch) immortal soul.

Not so fast. After Deena’s blood drips upon the bones, she is magically transported back to 1666 and Union, the small township on whose remains Shadyside is founded. She has become Sarah Fier and will see the final days of the young woman’s life through her own eyes, and the truth of what happened to the supposed witch is far more heinous and awful than the terrifying fairy tale people have been led to believe for the past 300 years.

With Fear Street Part 3: 1666, one of the most ambitious motion picture horror trilogies I’ve ever seen comes to a thrilling conclusion. Inspired by the literary world created by author R.L. Stine, Director Leigh Janiak and her talented team of co-writers do a superb job of juggling all of the interconnected components of this massive three-part puzzle, all of the seemingly disjointed pieces fitting together with startling ease.

If the first story was an homage to Scream and late 1990s, early aughts horror, and the second was an embracing of 1980s summer camp slasher aesthetics à la Friday the 13th, this climactic entry is a delicious throwback to both the Hammer gothic terrors and the Roger Corman/Vincent Price collaborations of the 1960s. Janiak boldly makes another titanic tonal shift that stays in place for the majority of this film’s running time, keeping that in place until events return to the original setting for a glorious final smackdown between good and evil where the future of Shadyside and its residents hangs precariously in the balance.

This does mean that much of the core plot dynamics occurring in 1666 are not altogether surprising. For all of its time shifts, the heart and soul of Fear Street is the 1994 relationship between Deena and Sam. While it has been an ongoing question as to whether this romance would survive in the face of such monstrous and senseless depravity, I don’t think it will catch anyone off guard that it is the fate of these two teenagers where Janiak focuses most of her creative energies.

Not to say that the story of Sarah Fier is given short shrift. What happens to her and the citizens of Union is of vital importance. Janiak has plenty on her mind, and while there have been themes regarding everything from economic disparity and social inequity littered throughout both of the first two pictures, it is here where the director makes her nerviest statements. This tale cuts right to the heart of the puritanical hypocrisy at the root of this country’s founding, the systemic patriarchal oppression that bubbles underneath the surface of the political and social reality of living in the United States even today nakedly flashed into a crystal-clear mirror for everyone to see.

It’s a lot to take in. Sarah Fier’s journey isn’t for the faint of heart, and while the true villain’s identity is honestly rather obvious, there is still plenty of heartrending power in how Janiak reveals what is going on and why it’s been allowed to fester and grow for centuries.

When things do come full circle, all of this only helps make the royal rumble at the Shadyside Mall all the more fantastic. Deena stands up, not just for herself, Sam, Ziggy (Gillian Jacobs) and her little brother Josh (Benjamin Flores Jr.), but also for all of those who have pointlessly lost their lives to a corrupt system that viewed the citizens of Shadyside as nothing more than chattel fit for slaughtering and precious little more.

Not to say Janiak still isn’t having fun. There is plenty of silliness to be found in this last installment. But while much of the humor still tickled my funny bone, I’m still struck by how profoundly relevant many of the interior dramatic sentiments of this one proved to be. There are moments I wanted to throw things at the screen as it felt like the director was hitting almost too close for home, the raw truths Janiak goes out of her way to expose cutting incredibly close to the bone.

The stunt casting which allows pretty much everyone who appears in both Fear Street Part 1 and Fear Street Part 2 to reappear in Fear Street Part 3 comes close to being a tad obnoxious, but as this foray into the distant past is seen through Deena’s eyes I’m not going to make too big a stink about it. Additionally, this does allow supporting players Welch, Ashley Zukerman and McCabe Slye real opportunities to shine. While I won’t say a lot about their characters – trying to avoid any inadvertent spoilers – each excels at making a memorably potent impression that’s key to where all of this is headed and how it gets there.

By now it’s pretty clear I’m in love with this series. Janiak has done something remarkable, and while I will say once again how sad I am that I didn’t get to watch these in a crowded theater with a screaming audience eager to eat up every second of the carnage, I’m still overjoyed by what the director has accomplished. Deena and Sam’s relationship is the stuff of romantic horror legend, Fear Street Part 3: 1666 an almost perfect summation to an impeccably crafted trilogy I’m going to be treasuring for many years to come. 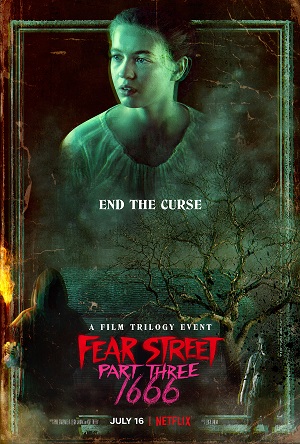