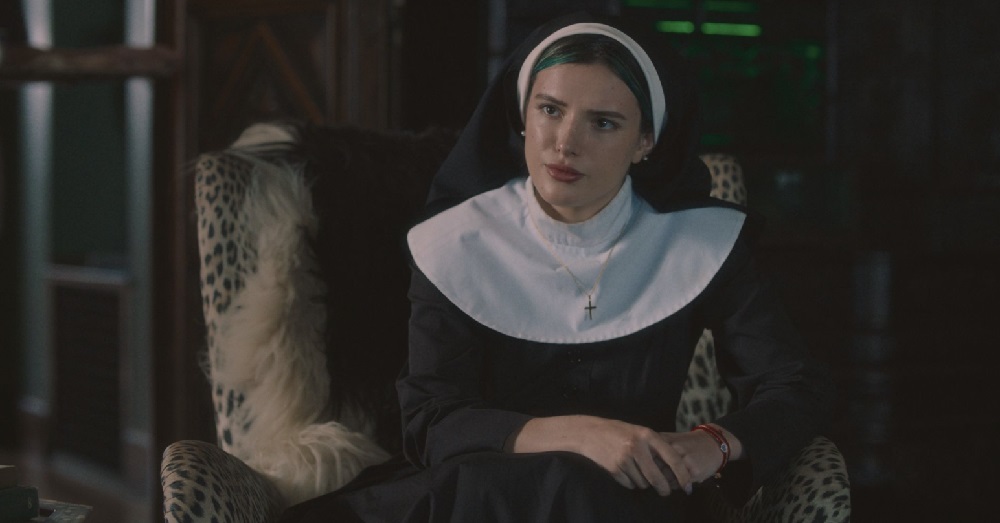 Messy Habit is a Stylistically Inconsequential Bit of Pulp Fiction

But when the unsold drugs and all of the evening’s profits are stolen by a one-night-stand, the ladies inadvertently make an enemy of the powerful Queenie (Josie Ho) and her murderous henchman Tuff (Jamie Hince). Knowing they need to hide out in the last place anyone would think to look for them, the Jesus-loving Mads decides they should masquerade as nuns until they have enough money to quietly escape town.

Habit is something of a 1990s Pulp Fiction–style throwback with female leads who find themselves navigating a True Romance–meets–Sister Act type narrative that is as unwieldy as it is oddly compelling. Directed by Janell Shirtcliff from a story she conceived with Mintz, the film is a messy genre mashup that never quite works. But I still couldn’t take my eyes off of it, and at a quick 81 minutes, it’s safe to say I never found a second of it boring.

I appreciated that Mads, Evie, and Addy are human train wrecks right from the start. Shirtcliff never tries to paint any of them as being anything more than what they are, and because of this, they all become moderately more realistic than they deserve to be in what is essentially a whack-a-doodle live-action cartoon. While I can’t say these ladies engendered my sympathies, they did keep my attention. I was always curious to discover what they would do next, even when their decisions frequently caused me to incredulously roll my eyes or ticked me the heck off.

I can’t decide what I think of Thorne. There’s something fascinating about the actress, a chaotically unhinged energy hidden behind her eyes that makes me think she’s always on the cusp of doing something unexpectedly outstanding. I always want her to succeed.

But in the same moment, whether in primary roles like this one here, the recent home-invasion thriller Masquerade, or last year’s Bonne and Clyde wannabe Infamous, or in brief supporting turns in genre riffs, like the excellent Assassination Nation or Netflix’s hit The Babysitter, I feel like I can always see Thorne acting. She never disappears into the material, making her an animatedly artificial presence in seemingly every project she appears in.

That kind of works here, especially considering just how hyperactively cartoonish both Mintz and Pejić are. For a scenario where Mads is supposed to be the most “believable” fake nun — blue hair, heavy makeup and all — thanks to the histrionics of her co-stars, Thorne comes incredibly close to pulling that particular impossible magic trick off. Evie and Addy are a human tsunami made flesh and blood, each woman callously, maybe even vindictively, yet also undeniably unintentionally wreaking all sorts of aggressive havoc no matter where they go.

Did I like Habit? No. I can’t say that I did. Was I still suitably impressed by the visual imagination fueling Shirtcliff’s handling of the material? Absolutely. No question whatsoever. This violently goofy descent into mayhem and gore is a stylistic marvel even if it is disastrously free of anything remotely substantive. I imagine for some viewers that will be enough. For others, they’ll be left wanting for more, their prayers hungering for something even passingly consequential frustratingly left unanswered. 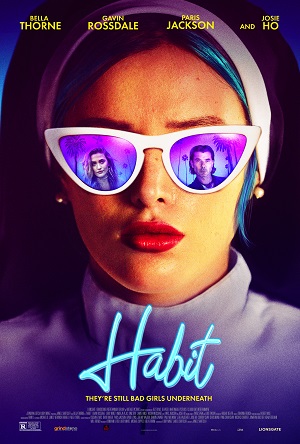