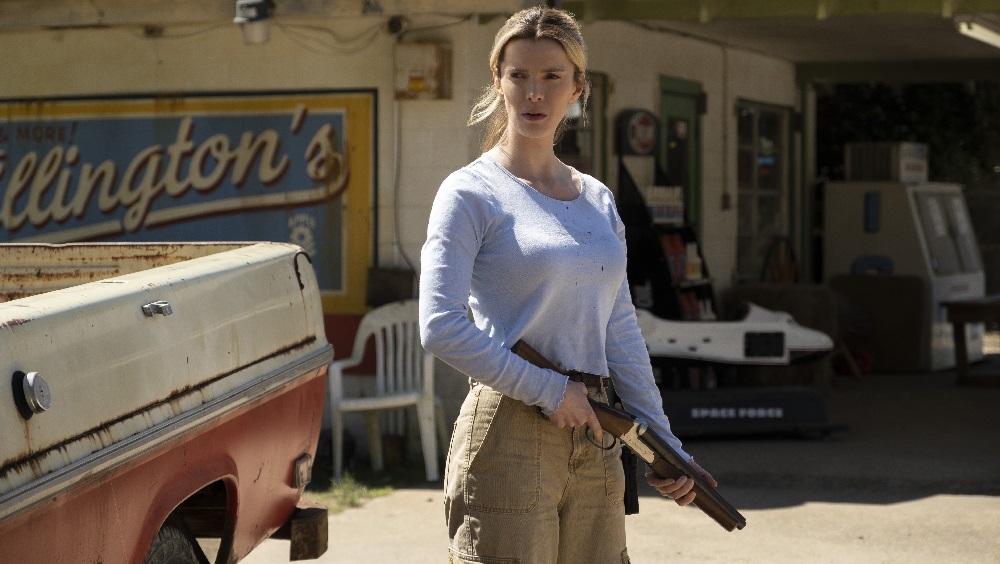 Considering he made both Compliance and Great World of Sound, it isn’t a shock director Craig Zobel would be drawn to a hot-button scenario like the one presented in Damon Lindelof and Nick Cuse’s screenplay for The Hunt. It’s a thriller that posits that the so-called Liberal elite can be just as clueless, intolerant and out of touch as the Conservative deplorable are oftentimes described to be, pitting each side in a gladiatorial battle to the death where the line between hero and villain is essentially nonexistent.

Problem is, other than a delightfully acidic performance from Hilary Swank and a stunning, star-making tour de force turn from “Glow” star Betty Gilpin, this is a movie that works better in theory and in concept than it sadly does in execution. Lindelof and Cuse’s script never maintains focus or balance, undercutting its more resonating satirical social and political observations thanks to a bizarre refusal to go for the cultural jugular. They play things oddly safe, diluting the impact of whatever it is they are trying to say so thoroughly that making heads or tails out of what the point of all this carnage and bloodshed is supposed to be close to impossible.

The initial plot dynamics are right out of The Most Dangerous Game meets Hard Target playbook. A disparate group of Caucasian ultra-conservative ideologues ranging in gender and age wakes up gagged in a secluded forest. In a giant clearing they discover a crate filled with weapons and one small pig. Puzzled, they all arm themselves while they also attempt to figure out what is going on. In now time at all, the group finds themselves under fire from a hidden bunker, and for those who survive the initial volley it is suddenly abundantly clear they’re being hunted for sport by unknown assailants determined to make trophies out of all of them.

Two-time Academy Award-winner Swank is Athena, the ticked-off mastermind behind this little safari. As for Gilpin, she portrays a member of the group being hunted, a determined survivor who is far more adept at handling herself in a life and death crisis than anyone involved on either side of this affair ever could have anticipated. Even though neither woman comes face-to-face with the other until the climactic act, they are still the duo who give Zobel’s thriller whatever urgency or emotional complexity it eventually conjures up.

This is especially true for Gilpin. This is a memorably ferocious performance, one overflowing in internalized rage and terrified disbelief that only grows in intensity as events progress. This is made all the more impressive considering that, even after she’s revealed to be the primary character and is in virtually every scene from that point forward, she does all of this with minimal dialogue. Gilpin’s body language, mannerism and tonal inflections do all of the heavy lifting, all of which makes her eventual showdown with Swank well worth the wait, if only just to see these two exquisitely talented actresses on the screen intellectually and physically sparring against one another.

If only Zobel’s latest was worthy of their titanic efforts to elevate it out of its inherent B-grade exploitation roots. The movie is a series of somewhat decent bait and switch sequences featuring a number of familiar faces (including Emma Roberts, Ike Barinholtz, Ethan Suplee, Macon Blair and a woefully underutilized Amy Madigan), the only issue being that they wear out their welcome fairly quickly. Zobel can’t seem to find a way to differentiate these scenes in any significant or memorable way, and it honestly isn’t until Gilpin takes center stage that any of these sudden bloodbath moments begin to resonate.

But the big issue remains the one I’ve already mentioned. This is a satirical thriller, in some ways reminiscent of The Purge series, that can’t seem to maintain focus or initiative as it moves along from one scene to the next. More to the point, when Lindelof and Cuse do make a valid, thought-provoking observation, they do so with zero subtly. Worse, it’s hammered home by Zobel as if he were wielding a two-ton sledgehammer. But the didactic preachiness is too toothless to become truly tiresome, and in some ways that might just be the most disappointing and frustrating facet of The Hunt of them all, making this satirical safari unworthy of any more of my attention. 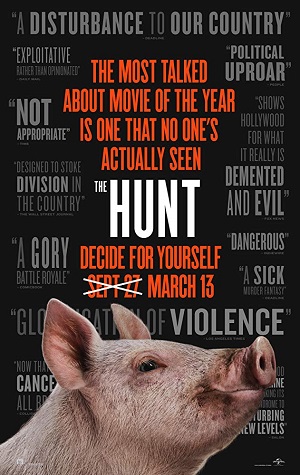