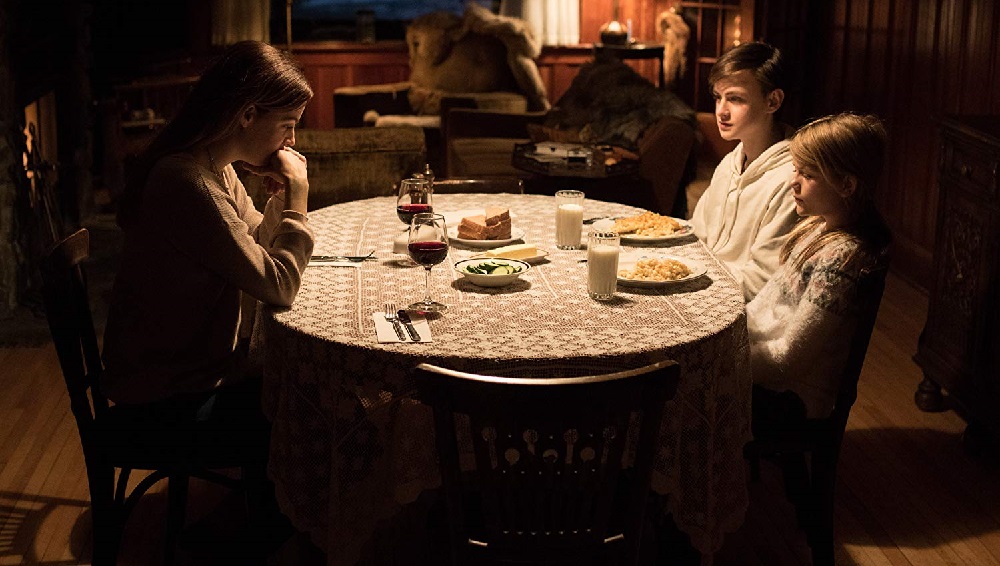 Not long after their mother commits suicide, Aidan (Jaeden Lieberher) and his little sister Mia (Lia McHugh) aren’t exactly thrilled when their father Richard (Richard Armitage) tells them they’re all going to be spending the Christmas holiday at their secluded mountain lodge with his much younger fiancé Grace (Riley Keough). Not only do they blame her for busting up their parents’ marriage, once they uncover that as a teenager she was the lone survivor of a religiously fundamentalist death cult the pair feel they have even more reason to be wary of her.

Nonetheless, they are off on this adventure together, Grace determined to win the children over to her side with kindness, affection and understanding. But after Aidan has to go back into the city for work, things suddenly take a menacing turn. Awakening one particularly frigid morning Grace, Aidan and Mia discover all of their personal belongings are gone, their phones are dead and the power is mysteriously out.

With the snow falling, temperatures precipitously dropping and no outdoor clothing to speak of, there is no way for any of them to try and go get help. It’s as if they’re in a state of purgatory or undead limbo, and before long Grace begins to wonder if the cult leader who had failed to take her life so long ago has somehow returned to do so now, taking Aidan and Mia right along with her.

Featuring a strong performance from Keough and elegantly uncomforting camerawork courtesy of cinematographer Thimios Bakatakis (The Killing of a Sacred Deer), as a follow-up to their acclaimed 2014 debut Goodnight Mommy directors Severin Fiala and Veronika Franz take no prisoners with the ferociously self-destructive thriller The Lodge. An unnerving freak-out that plays something like a mixture of Repulsion and Gaslight only in an even more isolated setting and with two pint-sized additions along for the ride, this psychological meltdown is a slow-burn terror that made me distinctly uncomfortable. I was on pins and needles throughout, the climax showcasing a hushed ominousness that left me quietly shattered into a million teeny-tiny pieces.

Not that everyone is likely to have the same reaction. Much like their previous feature, Fiala and Franz deliberately pace things in a methodical manner, allowing the growing emotional and intellectual despair that’s attempting to destroy Grace before she can save herself and the two kids from a lethally frozen fate to build slowly and not all at once. But that also means their observational approach to psychological horror can try the viewer’s patience, and even I must admit, at least early on, I was kind of wishing the filmmakers would just get to the meat and potatoes of their scenario instead of focusing so meticulously on the appetizers.

But the eerie uncertainty of what is going on and why ended up getting to me something fierce. I liked the way in which Fiala and Franz let little pieces of this mystery’s solution come into the light in such an organically precise manner. I also loved how the script gets flipped on its head once the answer to the questions of how Grace, Aidan and Mia found themselves in this dire situation is finally revealed, the focus instantaneously shifting in order to reveal a brand new source of danger that had been hidden there, right out in the open, for the entire time.

After strong, scene-stealing work in films like American Honey, Logan Lucky and Hold the Dark, Keough is even more superb here. Grace’s determination to triumph over her fears and make friends with Aidan and Mia is heartwarming in its sincerity, making her reaction to the blossoming terror they are suddenly faced with all the more affecting. Keough walks a fine line, balancing between devolving into fits of twitchy catatonic terror to rising in heroic fortitude from one moment to the next. It all fragments into anarchy with a debilitating thud when Grace discovers a handful of frozen clues which all lead to only one terrible conclusion, the sight of the actress huddling on a snowy porch rupturing into a fit of tears one I’ll be thinking about for quite some time.

Ultimately The Lodge is powerfully haunting stuff, things building to a climactic turn of events that are as shocking as they are in some ways equally warranted. The final scenes are a gut-wrenching slap to the face, the hushed silence of the last image almost bringing me to tears. Life and death suddenly become indecipherable from one another, and the realization that a person’s sanity hangs by an even thinner thread than anyone, including themselves, initially comprehend is a catastrophic truth that can oftentimes lead to tragedy if one isn’t careful. Fiala and Franz have done it again, and I for one cannot wait to see what the pair have up their sleeve to frighten me with next. 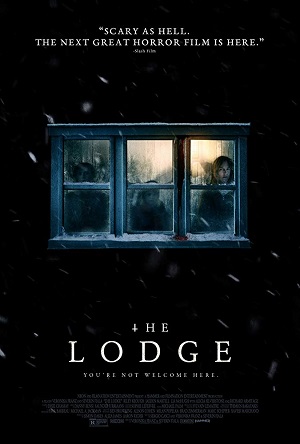