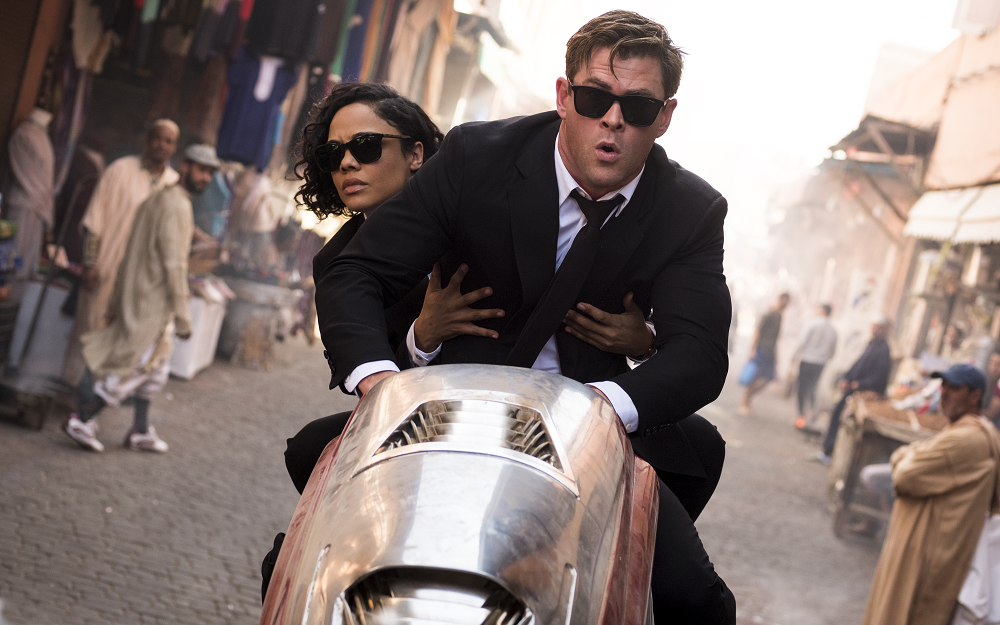 After a friendly close encounter as a child that was interrupted by a pair of men in fancy suits who convinced her parents that the weird creature they’d discovered was nothing more than a raccoon, inquisitive firebrand Molly (Tessa Thompson) has spent 20 years searching for the Men in Black. Now she has found them, tricking her way into their New York headquarters. Intrigued with Molly’s tenacity and intelligence, station chief Agent O (Emma Thompson) decides to bring the young woman into the fold on a probationary basis.

Rechristened Agent M, she is shipped off to London with orders to review the goings on inside that office with a fresh set of eyes. Given a warm welcome from the legendary Agent T (Liam Neeson), a.k.a. “High T,” the new operative also catches the eye of Agent H (Chris Hemsworth). H and High T once saved the Earth from an intergalactic evil known as The Hive with only a couple of low-powered plasma rifles and their wits, and ever since they’ve been looked on by the entire Men in Black as heroes. But after her first mission goes tragically south and she comes into possession of a mysterious object, M isn’t sure what to believe where it comes to H, and she’s not altogether certain she can trust High T or anyone else working in the London branch, either.

I get the idea behind Men in Black: International. It’s a popular franchise with three hit films (even if only two of them, the first and the third, are worth watching) and a glorious premise that should be fairly easy to mine for additional stories outside of the characters audiences already know. Also, after the massive success of Thor: Ragnarok, pairing Hemsworth and Thompson up again in a different motion picture which would allow them to explore new characters and different worlds seemed like a relative no-brainer. With previous Men in Black stars Will Smith and Tommy Lee Jones unlikely to return, planting these two newcomers into this world in their stead borders on being almost inspired, and the idea that filmmakers would be able to take things in new, crazily imaginative directions didn’t feel too far outside the realm of possibility.

Apparently it was. This fourth chapter in the long-running franchise is oddly unremarkable and is seemingly against taking anything akin to a risk. After a promising opening and a decent central idea of a newcomer coming to Men in Black who has made it their mission to purposefully seek them out like no one else has before them, Matt Holloway (Transformers: The Last Knight) and Art Marcum’s (Iron Man) screenplay appears to be content to rehash basic ideas and plot beats found in the 1997 original than it is in doing anything else. Worse, their scenario feels more like the pilot for a potential television series than it does a feature film, things so rudimentarily relaxed its as if the entire creative team was working on autopilot and not fully invested in crafting a story worthy of Hemsworth and Thompson’s efforts.

All of which is really too bad. This sequel is handsomely mounted, and while there’s too much emphasis on CGI and motion capture than there is on prosthetic makeup applications and practical visual effects, there are still just enough absurdly strange creatures lurking around the frame to keep things intriguing. I also can’t say Holloway and Marcum’s script does either a complete disservice to creator Lowell Cunningham’s source material or to the world initial trilogy director Barry Sonnenfeld put so much passion into creating. The whole thing is also nicely cast, and not just in the case of Hemsworth and Thompson, Rebecca Ferguson, Kumail Nanjiani and twins (billed here as “Les Twins”) Laurent Bourgeois and Larry Bourgeois all making semi-memorable impressions.

But director F. Gary Gray keeps things plodding along lackadaisically, which is a surprise considering he’s got films as varied as Straight Outta Compton, The Fate of the Furious, Set It Off and Friday on his resume, and for whatever faults they might possess none of them could ever be accused of being leisurely paced. But at almost two full hours, this movie trudges along with almost no interest in getting to its destination with anything approaching haste. There’s no urgency in regards to Agents M and H being able to figure out what is going on, who the bad guys are or what it is they need to do in order to save the day. It all just sort of follows an elementary, mostly straightforward path that is bizarrely content to do what is expected and nothing more.

Not that any of this means there still aren’t a few simple chuckles and a small handful of amusing moments. As Thor: Ragnarok already showed, Hemsworth and Thompson are a delightful pairing, and they don’t exactly have to work overtime to showcase their infectiously charming chemistry. Nanjiani’s diminutive motion capture character nicknamed “Pawny” is an ingenious hoot, while Ferguson’s brief appearance as an intergalactic arms dealer who shares a complicated past with H gives the film a noticeable and necessary shot of adrenaline that came just as my interest level had dropped down to barely above zero.

It’s all just so bland. The threat is vague and indistinct, the mystery far too easy to solve and the climax too instantly forgettable. While I do feel like this is a property with a ton of potential for continuation and think that there are a number of interesting tangents waiting to be explored, Men in Black: International is satisfied with doing what was done before in the previous trilogy. It’s a cinematic recycling job, and even returning composer Danny Elfman’s (working with newcomer Chris Bacon) energetic score and familiar theme aren’t able to inject enough life into this inert retread to make purchasing a ticket to see it in the theatre worthwhile. 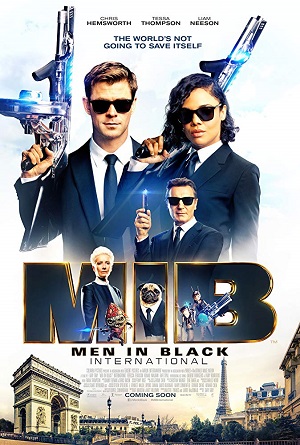