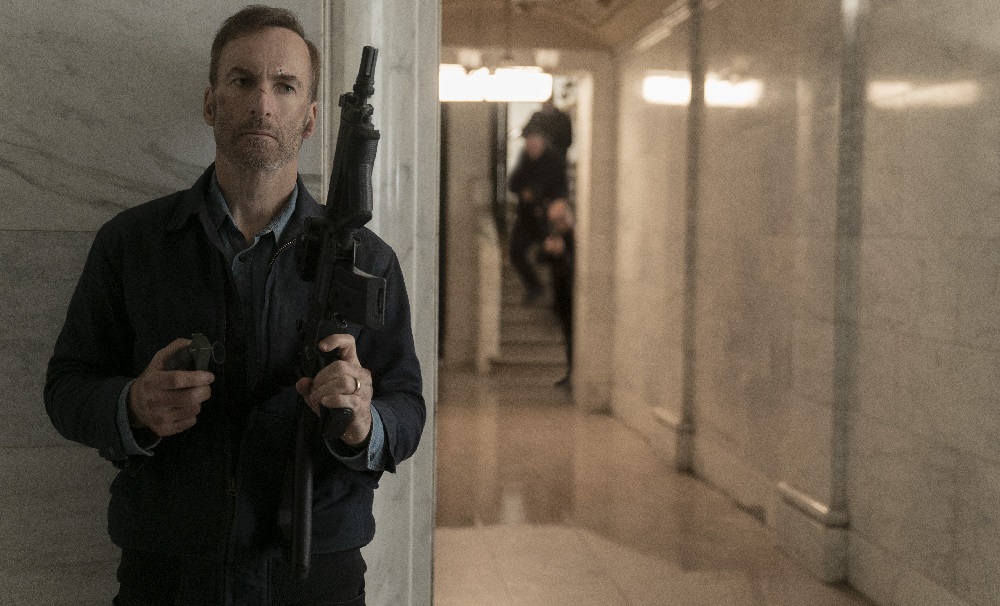 Hutch Mansell (Bob Odenkirk) is a quiet man. He goes through the monotonous drudgery of his day-to-day life because he thinks that’s what is best to ensure his wife Becca (Connie Nielsen), son Blake (Gage Munroe) and daughter Abby’s (Paisley Cadorath) happiness. Hutch visits his elderly father David (Christopher Lloyd) in his retirement home almost daily, while radio chats with faceless friend and former coworker Harry (RZA) bring him some semblance of momentary pleasure.

Things change after a home invasion robbery shocks the Mansell household. But while Becca is thankful no one was hurt, Abby pines for her missing kitty-cat bracelet and Blake silently fumes that his father didn’t lift a single finger to protect them, Hutch knows things could have gone much, much differently. There is an inner fury bubbling up inside of him; a violent anger he’s quietly kept in check for over a decade.

Written by John Wick scribe Derek Kolstad and directed by Hardcore Henry impresario Ilya Naishuller, Nobody is a violent action slugfest about a seemingly insignificant man who is anything but. Kolstad’s scenario comes across like the greatest Donald E. Westlake novel the hard-boiled author never wrote. For all the action pyrotechnics, this gritty throwback feels more like Point Blank or The Outfit than it does anything current, making “Better Call Saul” star Odenkirk the shockingly perfect choice to slip on this single-minded killing machine’s comfortable shoes.

Hutch is a force of nature from whom those with even the vaguest knowledge of his history walk in the opposite direction as quickly as they can. Nothing can stop him from completing a task, and those foolish enough to stumble into his way are lucky if they end up in the hospital on life support instead of in the morgue sporting a toe tag.

One of the great things about this character is that, while he may be unstoppable, that does not make him invulnerable. Hutch takes nearly as much as he dishes out. I love the messiness of his first pugilistic encounter taking on a bus overrun by a cadre of drunken delinquents. It’s been over a decade since he’s thrown a punch, and this purposeful inactivity initially shows: for every three or four hits he lands, he takes one or two hard shots in return before finally laying his assailants out cold to be picked up by paramedics later.

It takes a little while for the core plot dynamics to kick in. Hutch inadvertently angers a powerful Russian mobster (Alexey Serebryakov) who decides he needs to make an example of this man to maintain his iron-grip on power. This leads to a couple of minor skirmishes that inadvertently put Hutch’s family in danger, culminating in a blood-soaked finale where RZA and a terrifically enthusiastic Lloyd get to join in on the explosively gory fun.

Hardcore Henry was a one-trick faux-single-take pony that, while initially impressive, quickly wore out its welcome. Naishuller doesn’t get cute behind the camera this time. Instead, he centralizes the visual razzle-dazzle, preferring extended takes of carnage which allows cinematographer Pawel Pogorzelski’s camerawork (Midsommar) to do much of the visceral heavy-lifting. The film is also efficiently edited by Evan Schiff (Birds of Prey) and William Yeh (Equilibrium), the pair keeping the stunt work and action choreography from becoming a visual blur which increases the suspense quotient considerably.

There aren’t a lot of surprises, and I can’t imagine there will be many who find themselves remotely shocked where things end up. But none of that matters much. Odenkirk, doing his best Lee Marvin-meets-Warren Oates impersonation, is splendid as an unrelenting assassin masquerading as a quiet, practically invisible family man. Kolstad’s script is pugnaciously straightforward and free of unnecessary artifice. Naishuller directs with confidence, keeping the focus squarely on Hutch and refraining from indulging in any pointless overtly stylistic embellishments.

Nobody whacked me square in the face. I wouldn’t have wanted it any other way. 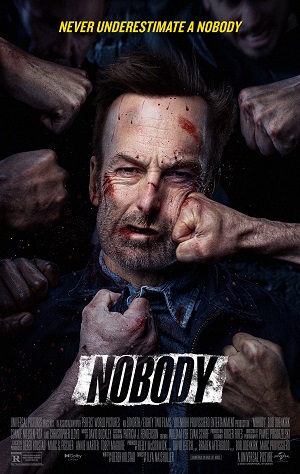