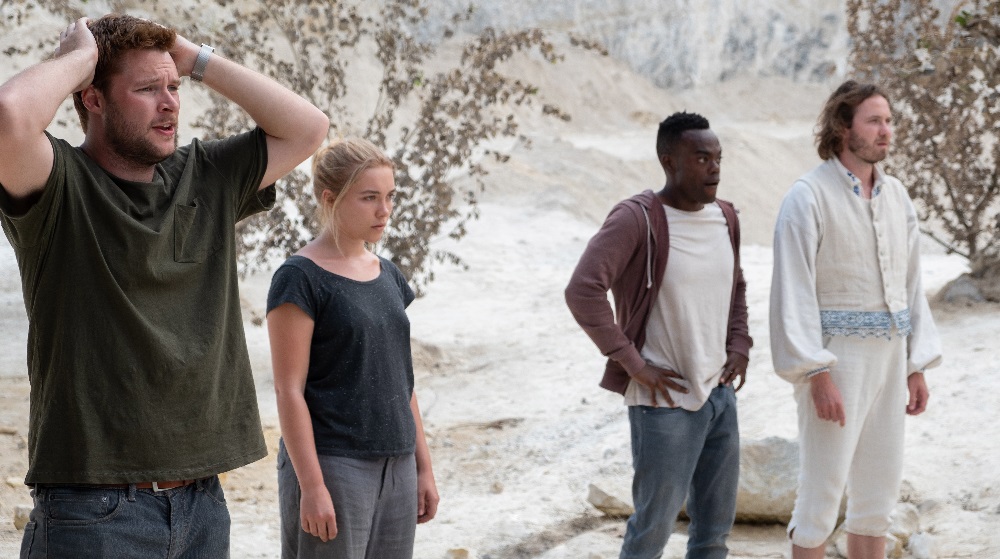 After a catastrophic family tragedy leaves her drowning in grief, Dani (Florence Pugh) decides to go on a summer trip to Sweden with her longtime boyfriend Christian (Jack Reynor) and their fellow graduate school classmates Josh (William Jackson Harper), Mark (Will Poulter) and Pelle (Vilhelm Blomgren). It is actually Pelle’s small hometown village to which they will be journeying, the group having been invited to attend this community’s nine-day “Midsommar” celebration. Josh is particularly excited, mainly because he’s writing his master’s thesis on pagan Midsommar rituals, so the fact he’ll be able to document this one up close will only strengthen any arguments and insights he brings to the finished paper.

They are joined by two other outsiders, British students Connie (Ellora Torchia) and Simon (Archie Madekwe), and initially Dani and the rest of the group are captivated by the idyllic countryside strangeness that colorfully envelops them. But it soon becomes clear that Pelle wasn’t entirely forthcoming when he explained about all that they would see and experience. Additionally, the cracks that were concealed in the foundation of Dani and Christian’s relationship start to magnify to the point they are no longer invisible, the young woman’s psychological state a whirligig of seismic shifts as she tries to deal with all she’s suddenly being forced to deal with.

Ari Aster, the man behind last year’s spellbindingly bleak Hereditary which featured a titanic performance from star Toni Collette, returns with another motion picture that also walks an exceedingly fine emotional tightrope while at the same time again gifts another stellar actress a signature role many will be waxing poetic about for years to come. Pugh, already having delivered a marvelous turn in Fighting with My Family just a few months ago, and with Lady Macbeth already sitting at the top of her resume, lights up the screen as Dani. Her wounds are deep, passionate and visceral, but there is also a hopeful gregariousness to her demeanor that lights up almost any room she walks into. Pugh balances her character’s growing shock and despair as she realizes this pagan ritual isn’t as innocent as she assumed it was going to be with an emotional disrepair born from her family tragedy and the understanding Christian might not be the man she thought, or maybe even tricked herself into believing, he was. It a tour de force turn that burns right through the screen, the young actress stripping herself nakedly raw with a naturalistic exactitude that’s stunning.

As for the movie itself? I have trouble saying I liked it all that much. It all felt too pompously overblown and lazily obvious to me, Aster channeling films like Robin Hardy’s The Wicker Man, Stanley Kubrick’s The Shining and Ben Wheatley’s Kill List (just to name three) as he attempts to bring his character-driven plunge into pagan ritual to life. But the smartest characters disappear the quickest and do so in ways that are so unbelievable I couldn’t fathom how even the dumbest of the remaining visitors didn’t fathom something ominous was going on and immediately hightail it out of there whether Pelle wanted to give them an assist or not. Additionally, other than Dani the remaining members of her friend group, including Christian, are so obscenely unlikable their respective fates, no matter what they might be, were inconsequential as far I was concerned.

Don’t get me wrong. I think all of the actors are good, especially Poulter, Mark’s gleefully arrogant smarm dripping off the screen in ways that are consistently amusing, and I also continue to think Aster is a meticulous cinematic craftsman with a visual ingenuity that’s oftentimes incredible. Even though I knew it was coming, the first act of violence during the Midsommar rituals that occurred still got me to audibly yelp when this bit of gruesome sensationalism finally occurred, the filmmaker holding on the reactions from Dani and the rest of the newcomers instead of spending a ton of time allowing cinematographer Pawel Pogorzelski’s (Tragedy Girls) camera to linger too long on all the gorily splattered remains. Aster also unleashes a spellbinding sequence chronicling the selection of the ritual’s May Queen, shifting back and forth between Pugh’s and Reynor’s differing points of view with energetically inventive confidence.

None of which ended mattering as much as I thought it was going to. As malevolent as the climactic moments are, I can’t say I felt anything other than moderately bemused indifference as they finally played themselves out to conclusion. Why not every plot beat and narrative trick was preordained, I equally cannot claim that Aster’s script went anywhere even slightly surprising. There were only so many ways this story was going to play itself out, and because of this there just wasn’t a heck of a lot in the way of suspense or tension during the last third. As far as major problems are concerned that one hit me as being frustratingly significant, and for a motion picture running just ten minutes shy of two-and-a-half-hours it is unlikely bored indifference was the state of being the director was likely hoping I’d be stranded in as things came to an end.

Listen, there is a lot to unpack where it comes to Midsommar, and a lot of it is definitely, a defiantly, worthy of additional dissection and debate. More important, Pugh cements herself as a volcanic talent destined for greatness, her performance as Dani almost worth the price of a matinee ticket by itself. But as wonderful as all of that might be the movie still left me a little cold, and as dynamically shot, precisely edited by Lucian Johnston (Hereditary) and creepily scored by Bobby Krlic as it all was, this thriller was one descent into sunshine-filled pagan madness I could have done without. 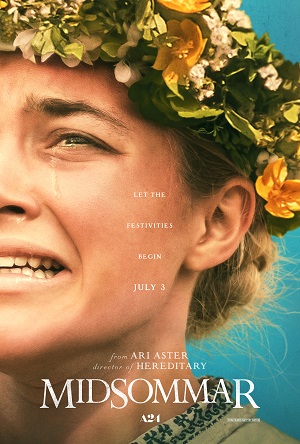