But unlike classic adaptations helmed by Fred M. Wilcox in 1949 and Agnieszka Holland in 1993, Munden’s effort feels more like a picturesque Cliffs Notes take on the material more than it does anything substantive. Working from a script written by Jack Thorne (Wonder, The Aeronauts), for some reason the director has the darndest time fleshing out pretty much all of the key supporting characters. As such, Mary’s journey from entitled selfishness to self-sacrificing selflessness is an overgrown emotional meadow in desperate need of gardening.

I just can’t say I was even invested in the outcome, the story’s inherent magic never strong enough to mask this presentation’s frequently obvious shortcomings. For all that Munden gets right, as terrific as Egerickx might be, by the time the fiery and redemptive climax rolled around I’d almost entirely lost interest in seeing how the filmmakers were going to weave all of Burnett’s themes and ideas together into a finished tapestry.

Not to say that this new adaptation is a waste of time. Far from it. I loved the subtlety of how the titular garden is displayed, the blink-and-you’ll-miss-it way in which giant leaves part like curtains to provoke additional discovery or instead envelope visitors entirely as if their leathery greenery was a loving shoulder on which to cry. Dixie’s initial visit is an eye-popping marvel, an ingenious treasure trove of sights and sounds that thrust me forward in my seat and held me gleefully spellbound.

There’s also something to be said with how Munden and Thorne handle the brief prologue and the subsequent flashbacks showing why Mary was forced to relocate to England against her will. There is a beauteous hushed simplicity to these scenes that’s wonderful, the director weaving memory, fantasy and reality together into one single stream of childlike consciousness with sublime majesty.

Then there is Egerickx. Having already stolen her fair share of scenes in Jessica Swale’s Summerland, the actress is a force to be reckoned with in this. Mary isn’t the easiest character to warm to. That’s true as it pertains to Burnett’s source material and has subsequently been the case with each adaptation the book has spawned since first being published way back in 1911. Thorne’s script doesn’t soften the girl’s edges one bit, and while she’s suffered unimaginable tragedy, her initial sense of entitlement and haughty authority understandably makes her difficult to warm to.

Egerickx brings Mary to life several surprising ways. There is a palpable sense of unending grief lurking within the girl that’s heartbreaking, her quick wit and vicious temper masking the uncertainty and confusion she feels at being plopped into a world unlike anything she’s ever experienced before. But she has an equally sharp mind, a caring heart and a noble disposition, and watching all of that blossom into life is one of the film’s most rapturous joys.

I wish I could say the same about the rest of the cast. Colin Firth and Julie Waters are perfectly fine in roles that fit each of them like a glove. Yet, while I’d never claim either is going through the motions and just picking up an easy paycheck, I equally can’t say their performances are anything memorable, either. As for Edan Hayhurst, Munden and Thorne don’t do him or his character a heck of a lot of favors. By the time it became time for the actor’s character to silence the demons haunting him and to overcome the afflictions holding his body prisoner I oddly could have cared less.

The story remains largely unchanged. After the tragic death of her parents, Mary is sent to live with her mysterious uncle Lord Archibald Craven (Firth) at his secluded, rundown countryside estate. While investigating her new situation, the girl discovers a weeping bedridden cousin named Colin (Hayhurst) residing down the hall. She also unearths a secret, intentionally walled-off garden on the grounds overflowing in beauty, life and color.

It follows the expected path from there, Mary trying to learn as much about the garden and of Colin’s affliction as she can. It quickly becomes apparent that the former will play a significant role in helping the latter heal from his ailments both physical and emotional. In the process, they just might also reawaken the love sleeping deep inside Lord Craven’s heart as well, all three of them intimately connected to the garden in ways that will catch them all by complete surprise.

Munden and Thorne hit most of the requisite thematic beats with confidence. Lol Crawley’s (Vox Lux) cinematography is an explosion of emotive color, while Dario Marianelli’s (Atonement) sumptuous score is a constant revelation. But other than Mary the characters remained too nondescript and vaguely developed for me to fully embrace everything that was happening with open arms. This new The Secret Garden, while full of life and overflowing in imagination, still isn’t without its thorns. Had those been trimmed back even a little bit, I’d likely be frolicking through this film’s cinematic fields in bare feet and with a large smile plastered upon my face. 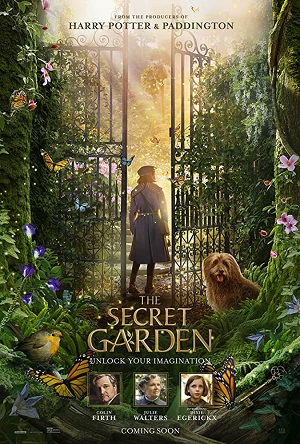