Imaginative Into the Spider-Verse an Aminated Triumph

After he is bitten by a radioactive spider while painting a graffiti mural in a suspiciously unused section of subway deep underneath the streets of Brooklyn, teenager Miles Morales (voiced by Shameik Moore) starts developing a variety of abilities similar to that of the New York’s friendly neighborhood Spider-Man (Chris Pine). Heading back into the subway to hopefully learn more about what has happened to him, the kid inadvertently stumbles into a secret room where Wilson Fisk (Liev Schreiber), a.k.a. The Kingpin, has constructed a massive supercollider in an attempt to build a bridge across the dimensional plain for his own nefarious reasons. Understanding that this machine could inadvertently create a black hole that could destroy all of Brooklyn, maybe the world, Spider-Man is on the scene battling the Green Goblin (Jorma Taccone) in an attempt to shut it down.

While Spider-Man is successful, he’s also lethally wounded. Before succumbing to his wounds he passes on a vital clue to Miles in regards to stopping The Kingpin from attempting to construct this dimensional bridge again. But he’s still a kid, and with no one to help instruct him on how to be a superhero or to use his powers he’s not sure what it was exactly the heroic web-slinger expected of him. So imagine his surprise when he ends up meeting Peter B. Parker (Jake Johnson), otherwise also known as Spider-Man, one dark snowy evening. Turns out that when The Kingpin turned on his machine he accidentally zapped this version of the hero out of his own dimension along with a few other wall-crawling vigilantes including Gwen Stacy (Hailee Steinfeld), Peni Parker (Kimiko Glenn), Spider-Man Noir (Nicolas Cage) and Spider-Ham (John Mulaney). They will all join forces to destroy the supercollider, get back to their own dimensions and assist Miles on his journey towards becoming the hero he is destined to become: the one and only friendly neighborhood Spider-Man.

Confused? I promise all of this makes a heck of a lot more sense as outlined in the stunning, marvelously entertaining animated adventure Spider-Man: Into the Spider-Verse. All this stuff about various dimensional plains and multiple realities, not even Back to the Future scientist Doc Brown could explain it all as clearly and as concisely as this movie does. Phil Lord (21 Jump Street) and Rodney Rothman’s (Grudge Match) screenplay takes the various versions of these comic book characters created by the likes of Stan Lee, Steve Ditko, David Hine, Fabrice Sapolsky, Brian Michael Bendis and Sara Pichelli and does marvelous things with all of them. They’ve constructed a superheroic stew that’s as tasty as it is filling with the main ingredient being Miles, his coming of age story and the relationship that blossoms between him and Peter B. Parker as events progress just about perfect.

That last comment is the most important one. Miles Morales is a hero for right now. He’s a role model for kids of all ages, backgrounds, nationalities and genders. Lord and Rothman allow him to stand at the center of this tale without shying away from any of the kid’s growing insecurities, doubts or questions. They let Miles wonder aloud whether or not he’s cut out to be his dimension’s new Spider-Man. They allow him to have normal, humdrum disagreements with his parents, overprotective dad Jefferson (Brian Tyree Henry), a respected Brooklyn police officer, and nurturing mom Rio (Luna Lauren Velez), an devoted emergency room nurse. He gets into trouble at school, is best friends with his secretive uncle Aaron (Mahershala Ali) and has an instant crush on the new girl who just transferred into his favorite class. In short, Miles is a regular kid with regular problems who wants to do the right thing whenever possible, and now that he has superpowers and promised a dying Spider-Man to save the city figuring out exactly what that right thing even is becomes more important than ever.

It’s all pretty funny, almost all of the gags and jokes hitting the funny bone with regularity, and the action set pieces are all deliriously well staged with an enthusiastic creative imagination that is consistently marvelous. As for the animation, while the herky-jerky, hyper-realistic character movements take a little getting used to, the comic book stylistics directors Bob Persichetti, Peter Ramsey, Rodney Rothman and their visually experimental creative team utilize is moderately unique. Most of all, though, the movie is just a heck of a lot of fun, the delirious affectionate charm of it all beyond imagining.

The vocal work across the board is top-notch, Moore, Steinfeld, Cage, Henry, Ali, Schreiber, Lily Tomlin (as Aunt May), Zoë Kravitz (as Mary Jane) and Kathryn Hahn (as a character I’m not going to spoil) all having their fair share of memorable moments where every one of them make their respective mark. There’s also a delightful surprise appearance from Oscar Isaac as “Interesting Person #1,” and I strongly suggest people stay through the credits for the film’s stinger just to discover which character he’s suddenly popping up as. I also love how reverential (and referential) this adventure is to the Sam Raimi directed Spider-Man trilogy, especially parts one and two, while the clever digs the filmmakers take at 2007’s concluding third chapter come from a place of love and affection and not one born from derision or hate.

But the best thing about Spider-Man: Into the Spider-Verse remains Miles Morales. The movie injects a sense of originality and imagination into the popular comic book property, and as good a job as Marvel and Sony have done bringing Peter Parker back to relevance with Spider-Man: Homecoming and the character’s appearances in both Captain America: Civil War and Avengers: Infinity War, that’s moderately insignificant in comparison to what happens here. There is something new about this adventure that can be traced squarely to the injection of this fresh blood into the proceedings. Miles is a hero anyone and everyone can relate to, making his animated debut a family-friendly present worth heading to the closest theatre to unwrap at any point throughout this holiday season. 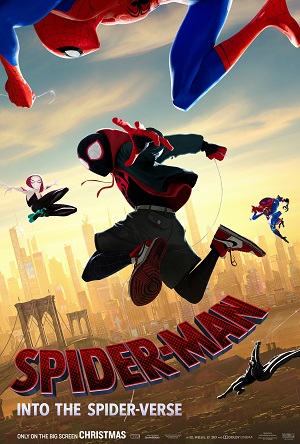