Spiderhead is a great Twilight Zone or Black Mirror scenario, only one that offers up a terrific idea, asks several fascinating questions, and then frustratingly doesn’t know how to reach a satisfying resolution. Even so, thanks to director Joseph Kosinski’s (Top Gun: Maverick, TRON: Legacy) nimble handling of the material and a larger-than-life, charismatically chilling performance from star Chris Hemsworth, there’s still plenty to enjoy.

Spiderhead is a state-of-the-art penitentiary located on a remote island far from the prying eyes of civilization. More high-tech resort than prison, the inmates have volunteered to be test subjects for an array of top-secret psychotropic cocktails designed to alter a user’s consciousness and control their physical actions. They are allowed the freedom to wander around the facility and spend their time as they choose, knowing any infraction will result in their immediate expulsion and a return to a maximum-security penal institution for the remainder of their sentence.

It’s all run by the enigmatic, unrelentingly pleasant Steve Abnesti (Hemsworth), and he makes it his mission to treat each inmate as if they were his best friend. His star guinea pig is Jeff (Miles Teller). The young man is incarcerated for committing manslaughter while driving under the influence, and he views being a test subject as a form of penance that will hopefully stop others from following in his deadly footsteps. He authorizes Abnesti to give him all sorts of viral chemical cocktails, each bringing forth a wide variety of emotional states from abject fear to overwhelming lust, not to mention numerous psychological pitstops in-between.

The basic plot points aren’t particularly surprising. Spiderhead isn’t what it appears to be. Abnesti’s goals aren’t as altruistic as claims. Key tests will go tragically wrong, and Jeff will learn horrifying truths that make him question everything he’s approved to be done to him while at the penitentiary. It all builds to a psychological battle of wills between prisoner and warden, every emotion augmented and made more difficult to believe the authenticity of because of the drugs coursing through each man’s veins.

When Rhett Reese and Paul Wernick’s (Zombieland) adaptation of George Saunders’ short story Escape from Spiderhead focuses on the relationship between Jeff and Abnesti, the film excels. When it spends time looking at the former’s drunken accident that landed him behind bars or his romantic relationship with fellow inmate Lizzy (a determined Jurnee Smollett), sadly the pair’s work comes up a little short. There is also the hopelessly rushed climax to be dealt with, the final minutes moving at such a breakneck pace the whole film comes perilously close to descending into nonsensical chaos.

Granted, that may be the point. The serums Abnesti is testing induce a mixture of psychedelic pandemonium that, despite the scientist’s claims otherwise, grow increasingly out of anyone’s control. Up is down. Left is right. Time becomes abstract. Fear is an illusion. Sexual attraction is a figment of the imagination. It’s all in a pursuit to subordinate free will and create blissful drones who would never dream of harming themselves or others, even if that means erasing the idiosyncrasies that make each person unique.

Hemsworth is outstanding. Abnesti is the type of character who plays directly to the actor’s strengths. The screenplay relies upon his sense of self-effacing humor, his clever cocksure confidence, and his athletically awkward physicality. Kosinski gives Hemsworth the freedom to draw the viewer in with casually debonair indifference before lowering the boom and showcasing his true Orwellian colors. This makes Abnesti a chillingly magnetic villain, and if the film has any lasting resonance, it is almost entirely because of him.

It’s a shame the final act is an unadventurous letdown. There are only so many places this scenario can go and unfortunately Reese and Wernick take the most obvious route. Because of that, it feels as if Kosinski made the calculated decision to speed through the finale, thinking that momentum may create additional tension that’s been unintentionally diluted courtesy of the banal familiarity of the climactic plot developments.

Does it work? Not really, but due to Kosinski’s skills behind the camera and Hemsworth’s smarmily sweaty paranoiac charm in front of it the thriller comes awfully close to being a success. There is something grand about seeing Abnesti held accountable for what he’s done, and the redemption arc for Jeff and Lizzy isn’t without its positives. While Spiderhead is far from perfect I’m still glad I gave it a look. Ultimately, that’s what matters most. 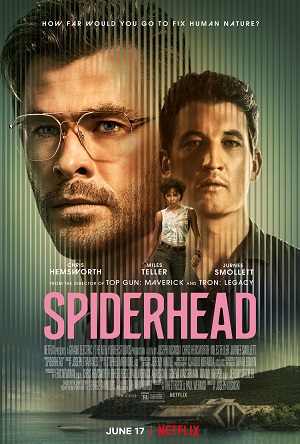