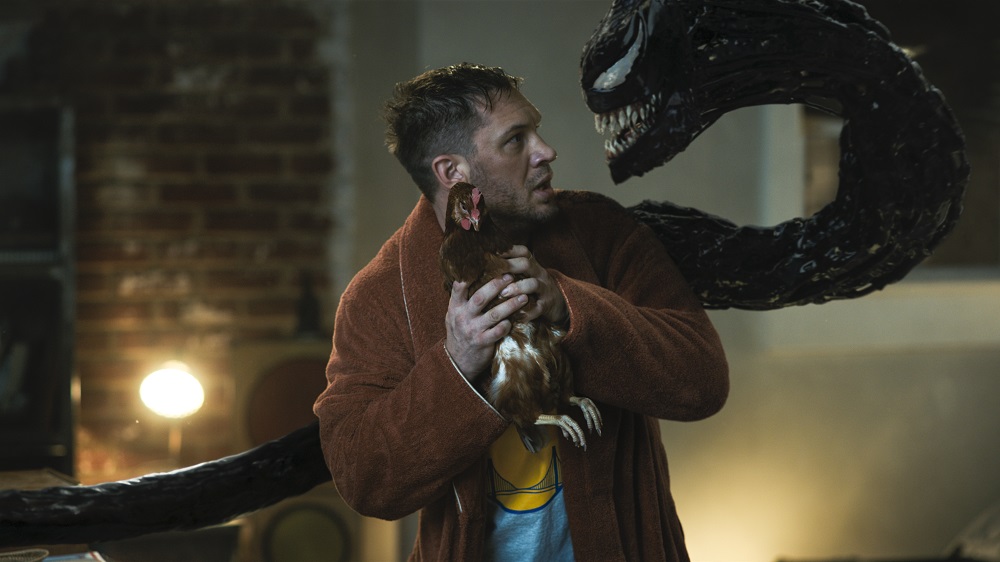 I did not enjoy 2018’s Venom. That does not mean I didn’t see value in Tom Hardy’s energetically messy performance as investigative reporter Eddie Brock or in his equally overcaffeinated, himbo turn as the human’s alien symbiote alter ego, Venom. While director Ruben Fleischer’s film was a visually incoherent disaster, giving Hardy free rein to do seemingly whatever the heck he wanted was a stroke of genius.

For the convolutedly absurd Venom: Let There Be Carnage, I get the feeling Hardy (who is also credited with co-writing the story for this sequel), new director Andy Serkis (Breathe) and screenwriter Kelly Marcel (Cruella) thought to give the actor free rein. They lean hard into the purposefully dorky bromance between Brock and Venom, their muscularly homoerotic spats displaying an agreeably anarchic oomph that’s like some loopy cross between Monty Python and the Marx Bros souped-up on six or seven Red Bulls.

It’s dumb. It’s loud. It barely makes a lick of sense. But unlike its predecessor, this second cinematic outing for the popular Marvel antihero is also a heck of a lot of fun. Hardy bounces across the screen like a sweaty, unshaven bunny rabbit jonesing for his next hit of carrot juice (or, in this case, a basketful of chocolate or the head of a random bad guy).

Unlike Fleischer, Serkis knows how to utilize an overabundance of CGI and motion capture in a visually appealing way. Thanks in large part to the director – no stranger to similar special effects technology acting in the 2005 King Kong remake and the Lord of the Rings and Planet of the Apes trilogies – and to Oscar-winning cinematographer Robert Richardson (The Hateful Eight), there is a noticeable cohesion to the images, and considering how frenetic the action can get, that’s no small thing.

Seriously, though, this film is an illogical hoot. I’m not sure Hardy and Marcel are even trying from a story standpoint. The core action elements are a hodgepodge of thinly constructed ideas coupled with half-baked character development. The plot boils down to some sort of mélange of having had a bad childhood, missing your beloved sweetheart and having homicidal daddy issues. Other than that, it’s hard to tell, or, for that matter care, about anything that is going on and how that will affect the relationship between Brock and Venom.

Considering the baddies are played by an enthusiastically outrageous Woody Harrelson and a terrifyingly overly sincere Naomie Harris, I’m not altogether certain any of that matters. Harrelson, introduced at the end of the first film as bloodthirsty serial killer Cletus Kasady, is having what appears to be an absolute blast strutting around in this sequel. While I won’t go into the specifics behind his transformation into red symbiote Carnage, the actor knows the job he’s been hired to do and excels at exceeding expectations whenever possible.

Harris might be even better. I’m not at all familiar with the comic-book version her character, screeching banshee of a mutant Frances “Shriek” Barrison. While her screen time limited, the actress makes the most of every second. In fact, had Serkis wanted to, it’s likely he could have constructed a bloodcurdling horror film for Harris instead of planting her inside this comedic superhero Odd Couple knock-off. Just a brief, off-kilter glance from her is bone-chilling, and Shriek’s gleefully girlish giggles after being rescued from an asylum by Kasady/Carnage are even more so.

But this is Hardy’s show and he knows it. Whether dropping the mic at a neon-lit LGBTQ Halloween rave as Venom or having a heartfelt conversation with a pair of chickens as Brock, the actor does whatever it takes to generate a laugh. He’s Jack Lemmon and Walter Matthau or Peter Falk and Alan Arkin all rolled into one, his jovial back-and-forth verbal gymnastics a thrillingly goofy highwire act that’s simply out of this world.

There’s nothing more to add. Forget about the plot. Don’t shed too big a tear that Michelle Williams is once again sadly wasted as Brock’s ex-girlfriend, Anne Weying. I’m not sure it’s even worth getting all that upset that the action, while better than the last film, still isn’t especially noteworthy.

No, strangely, none of that matters, because Venom: Let There Be Carnage somehow ends up being a comedic tour de force and one of 2021’s most shockingly entertaining motion pictures. Can’t say I saw that coming. Not at all. 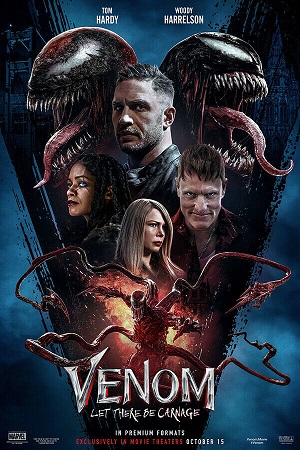