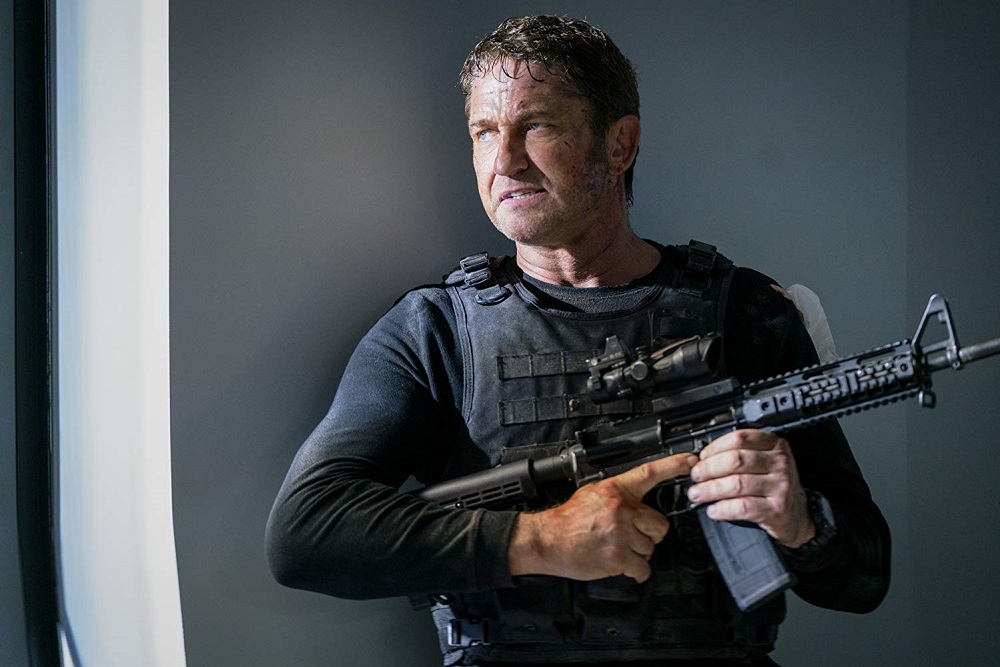 Crack Secret Service agent Mike Banning (Gerard Butler) has already served his country with the distinction. He twice saved the life of the former President of the United States, once inside the White House and once during a diplomatic trip to London. Current President Alan Trumball (Morgan Freeman) holds Banning in such high regard he’s thinking of promoting him to head the Secret Service once the agency’s current director (Lance Reddick) retires. It’s a plum opportunity, and one no one in their right mind should turn down. But Banning, even with age and physical exertion starting to take their toll upon him, isn’t sure he wants to get out of the field, this man of action worried that sitting at a desk supervising others will be a waste of his lethal protective abilities.

He might be right about that. After a devastating attack on Trumball via a massive miniature drone strike leaves all of Banning’s Secret Service team dead and he and the President in the hospital, it becomes clear this agent isn’t done serving his country in the field. This becomes especially true when he is arrested for the assassination attempt, dogged FBI investigator Agent Thompson (Jada Pinkett Smith) stating in no uncertain terms all of the evidence points to him as the perpetrator. Knowing in his gut that Trumball is still in danger, Banning escapes the hospital and goes on the run knowing that those who framed him aren’t going to want any loose ends and will likely attempt to track him down before he can uncover their identity. With Thompson on his tail and a bevy of highly-trained assassins gunning for him, this Secret Service legend will rise to the occasion one more time, and no matter what obstacles are tossed like a grenade his direction he’ll protect the President of the United States whatever the personal cost might ultimately prove to be.

I seriously doubt anyone who saw 2013’s Die Hard knock-off Olympus Has Fallen could ever have imagined they were witnessing the first installment in what would prove to be “the Mike Banning trilogy.” But after 2016’s London Has Fallen and now this latest chapter of the series Angel Has Fallen that is exactly what we now have. These films are aggressively violent, moderately jingoistic 1980s-style action throwbacks more reminiscent of the works of Chuck Norris, Steven Seagal or Jean-Claude Van Damme than they are the above-the-title efforts of Bruce Willis, Arnold Schwarzenegger or Sylvester Stallone (not that there’s a ton of difference between them all). They showcase a form of unbridled masculinity that almost feels passé in today’s current political and social environment, their aggressively virile intensity unsurprisingly not going to please everyone.

Not going to lie, the first two movies have kind of started to grow on me over the past few years, the crazy, messed-up and absurdly gory London Has Fallen in particular. The loony cartoonishness of these action spectacles almost can’t help but moderately tickle my funny bone and excite my senses a moderate amount. Even better, as brawny showcases for Butler to flex his muscles, sweat profusely and angrily growl with ever-increasing magnetic intensity, they’re just about perfect, and while I’d never describe any of the entries in this trilogy as being “good,” that doesn’t mean I still don’t find them to be oddly entertaining, a statement that includes this latest effort as well.

I will say that Angel Has Fallen does try to have its cake and eat it, too, and that’s not exactly awesome. After the implausibly idiotic events of the previous two films where Banning was presented to be nothing short of superhuman, I can’t say learning his body was starting to fail him due to all his heroic exploits generated much in the way of sympathy out of me. While I appreciate that screenwriters Robert Mark Kamen (Taken), Matt Cook (The Duel) and director Ric Roman Waugh (Snitch) would like to humanize the character, to ground him in some semblance of authentic human emotion, at least somewhat, I can’t say they are that successful in their attempt. All they really do is add narrative elements that grind things to a tediously sudden halt, and it is only when Banning gets back to work trying to solve the mystery of who it is that has framed him and the bullets start flying once again that things get back to being entertaining.

This includes an entire subplot devoted to the Secret Service agent’s estrangement from his Vietnam vet father Clay, a former “tunnel rat” now living off-the-grid as if he were an even more politically paranoid Ted Kaczynski. The pair’s reunion feels cheap and maudlin, and if not for the fact Clay is portrayed with great gonzo gusto by the great Nick Nolte it’s likely I’d have rolled my eyes back into my head in disgust and checked out of the movie entirely. But because he is, and in large part because Butler appears to be having such a blast acting alongside the three-time Academy Award nominee, these father-son moments of togetherness aren’t nearly as annoying as they otherwise could have been. Better, once the team of assassins comes hunting for them Waugh stages scene after scene of pyrotechnic lunacy that’s pretty darn sensational, the melodramatic tedium of all this inert character-building stuff thankfully tossed to the sideline.

Pinkett Smith is wasted in a nothing role, her Agent Thompson nothing more than a gender-flipped Samuel Gerard clone from The Fugitive that the script seems to have no use for whatsoever. Also, while Danny Huston (as a former Special Forces operative who now runs a Blackwater-like private military company) is presented as the big-bad hunting Banning, it’s never a secret who it is sitting behind the curtain pulling the former soldier’s strings. There are zero bombshells here, and not for one single second did I not know where everything was headed and how the film itself would end up coming to conclusion.

Even with all of that being the case, even though I know I shouldn’t probably say this, I still had a pretty great time watching Angel Has Fallen. The final 30 minutes delivers a cacophony of old school action theatrics that had me sitting giddily on the edge of my seat just waiting for Banning to pull out his trusty knives and go to work skull-crushing work against those out to assassinate the President. Expertly edited by Gabriel Fleming (Blindspotting) and kinetically shot by Jules O’Loughlin (Krampus), this climax was well worth the wait. Faults, flaws and all this supposedly final chapter in the adventures of Mike Banning got the job done as far as I was concerned, and I’m honestly glad I took the time to give it a look. 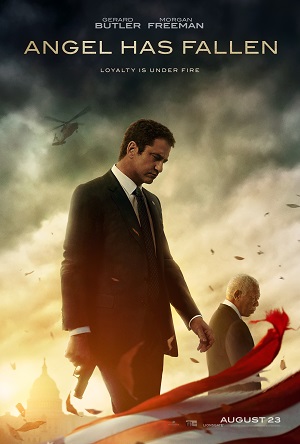