The evil has been contained. Ed (Patrick Wilson) and Lorraine Warren (Vera Farmiga) have added the demonic doll Annabelle to their artifacts room, taking the extra precaution of placing her in a locked case made entirely out of church glass so her powers do not affect any other items they have collected over the years. Everyone that comes into their house knows they are not allowed into this room unattended, including their daughter Judy’s (Mckenna Grace) trusted babysitter Mary Ellen (Madison Iseman).

But when the Warrens leave for a brief overnight paranormal investigation, Mary’s best friend Daniela Rios (Katie Sarife) invites herself over for a visit under the pretense of helping celebrate Judy’s birthday. In actuality she wants to see what is inside the legendary artifact room, sneaking in to get a peek after everyone else has gone to bed. While fingering a number of the supposedly cursed items littering the various shelves, Daniela also inadvertently leaves Annabelle’s case unlocked. Not only does the doll escape, she also gives life to the demons whose possessions the inquisitive teenager touched while exploring the artifact room. Now Judy, Mary and Daniela are all in danger of losing their immortal souls, and the only way to survive the night is to put Annabelle back in her prison so her Hell-spawned evil can once again be contained.

Annabelle was released in 2014. It was the first spin-off born from James Wan’s 2013 horror yarn The Conjuring and, even though it wasn’t very good, ended up doing exceedingly well at the box office. This led to the 2017’s Annabelle: Creation which not only was also a solid summertime hit, director David F. Sandberg’s prequel was also a substantial step up in quality from its predecessor and helped prove a “Conjuring Cinematic Universe” wasn’t as terrible an idea as some (myself included) thought it was going to be. While both last year’s The Nun and this past April’s The Curse of La Llorona were decided mixed bags, the popularity of these genre entries partially inspired by Ed and Lorraine Warren cannot be denied, so it isn’t exactly shocking producers have returned to the malevolent doll that made all of this possible with the enthusiastically creepy Annabelle Comes Home.

As much as I enjoyed that second adventure with the evil titular doll, Annabelle Comes Home is such a massive amount of sinister fun it might be my favorite entry in The Conjuring universe outside of the first film. Franchise screenwriter Gary Dauberman (Annabelle, The Nun) makes his directorial debut with the sequel, and in the process crafts a delightfully spooky funhouse of thrills and chills I got a major kick out of. Utilizing a fantastic array of practical effects and an immersive sound design that had the hairs on my arms standing on end, the filmmaker makes a motion picture that’s equal parts The Haunting, Poltergeist and a random R.L. Stine Goosebumps story. While nowhere near the classic level of those first two titles or likely having the lasting appeal of that latter author’s numerous youth-friendly scary stories, there’s something to be said about what Dauberman manages here all the same, the film’s ghoulishly timeless appeal almost undeniable.

It starts with the characters. Judy, Mary and Daniela each feel authentic. In swift brushstrokes Dauberman manages to flesh each youngster out, giving them all compelling backstories and a valid reason to end up in the middle of all the supernatural chaos that is about to be unleashed. Even though the story is set during the 1970s the emotions swirling within each girl are still relatable, watching them find ways to band together to fight against a menacing evil, and doing so without passing judgement upon the one of their group who set Annabelle free, gives the film a heartfelt foundation I definitely appreciated. Daniela, in particular, is a far more complicated character then it initially appeared she was going to be, Sarife doing a terrific job of giving the teenager additional emotional dimensions that only helps augment the growing dread as the doll brings life to many of the more dangerous artifacts the Warrens have attempted to safely lock away.

Of course, it is those additional artifacts that end up making this latest entry in The Conjuring universe such a giddily suspenseful rollercoaster ride. Daniela unleashes a ferryman who steals souls, a hellhound looking to possess a new human host and a lethal wedding dress that transforms its wearer into a homicidal bridezilla with a taste for blood. The three girls have to navigate all of these dangers and more as they try to keep Annabelle from stealing their immortal souls, and they must do so without any help from either Ed or Lorraine. Dauberman keeps the focus on the trio’s evolving relationship as all of the things going bump in the night try to possess them, their belief in one another and combined moral strength the only chance they have to survive.

A subplot involving Mary’s infatuation with a boy from school (who ends up having to battle said hellhound while hidden away in the Warren family’s backyard chicken coop) and his mutual affection for her ends up being more than a little silly, while the film’s climax is a little overly hurried and rushed. But the sequel is superbly shot by Michael Burgess (The Curse of La Llorona) and masterfully scored by series veteran Joseph Bishara. I also loved the way in which Dauberman expands upon the franchise’s mythology, especially as it pertains to Judy. Annabelle Comes Home is a devilishly gripping joy, and here’s hoping this demonic doll doesn’t stay locked away in her church glass prison for very long, as I for one can’t wait to see what terrors she’ll be able to unleash next. 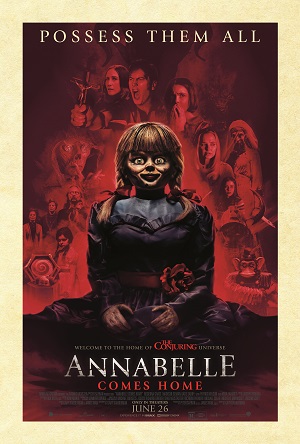