Much like Sony/Marvel’s Morbius earlier this year, Warner Bros/New Line Cinema/DC’s latest cinematic superhero showcase Black Adam is nothing more than a splashy, two-hour coming-attractions reel for future films. It’s a better motion picture overall than that earlier one was, and there are certainly a few moments that forced me to sit up slightly straighter and pay moderately more attention. But that doesn’t mean I’m giving this one a recommendation. Far from it.

I’m not familiar enough with the character created by Otto Binder and C.C. Beck to know how closely director Jaume Collet-Serra (Jungle Cruise, The Shallows) and writers Adam Sztykiel (Rampage), Rory Haines, and Sohrab Noshirvani’s (The Mauritanian) mirror the source material. Not that it matters. It’s like the team took a Superhero Storytelling 101 course and this is their final project. It’s connect-the-dots filmmaking, and precious little comes alive or ever feels emotionally authentic.

That’s a shame. There are plenty of commendable building blocks that Collet-Serra and his team lay down as a foundation. They’ve populated their world with a talented cross-section of established superstars and promising newcomers. They’ve chosen a uniquely intriguing Middle Eastern setting for all the chaos and carnage. They broach several complex topics that pertain to international peacekeeping and all that goes with it.

They just don’t do anything substantive with any of it. Everything is rushed through and glossed over. Why the fictional country of Kahndaq is under the thumb of a multicultural gang of surprisingly well-equipped thugs known as “Intergang” isn’t clear. The left-field connection of the mysterious “big bad” to the film’s 2600 BCE prologue and the person who has been secretly pulling the strings of this country’s occupation is underdeveloped and poorly revealed.

These are only a handful of this production’s issues. It’s as if a new item springs forth every other minute to shake one’s head at in annoyance. For every terrific moment — and there are terrific moments — there are at least four or five that are either obnoxious or troublesome (or both). With rare exceptions, there is no momentum to the action, and even less urgency. Also, the ancient magical crown the evildoers are trying to get their claws on is a throwaway McGuffin that serves zero purpose until the random second it’s needed — and then all hell literally breaks loose.

This comic book tale revolves around Teth-Adam (Dwayne Johnson). Having been asleep for 5,000 years, the fabled Kahndaqian “hero” is released from his stone prison by Adrianna (Sarah Shahi), a tomb-raiding freedom fighter who has been a major thorn in Intergang’s side. A group of powerful wizards led by the original Shazam! (Djimon Hounsou) bestowed upon Adam the power to overthrow an evil king, but his anger got the better of him and he almost destroyed the entire country instead of saving it from tyranny.

Few know that part of the story, and this includes Adrianna’s adventurous teenage son Amon (Bodhi Sabongui). He looks at Adam and only sees his country’s savior. But Amanda Waller (Viola Davis) knows exactly who they are dealing with. She sends the leader of the Justice Society (or JSA) Carter Hall, aka Hawkman (Aldis Hodge), and a small band of fellow heroes to Kahndaq in hopes they can convince Adam to surrender before he starts making an angry and vengeful menace of himself.

What follows are a series of disconnected scenes in which Adam rips through Intergang like butter, bonds with Amon as the latter tries to teach him how to be a superhero, and has a couple of fights with Hawkman and his compatriots Dr. Fate (Pierce Brosnan), Cyclone (Quintessa Swindell), and Atom Smasher (Noah Centineo), the latter two out on their first save-the-world assignment from Waller. There is also the search for that aforementioned mystical crown, as the person who unlocks its secrets will tap into some seriously demonic, potentially world-ending powers.

The first fight sequence between Adam and Intergang after his awakening is borderline awful. Collet-Serra attempts to channel his inner Zack Snyder and fails miserably. But the director redeems himself with the first confrontation between the awakened antihero and the JSA. This is a nicely staged slugfest that does a solid job of spotlighting everyone’s various powers without the aid of individual origin stories. From there, one confrontation leads to another, with spontaneous bits of (mostly worthless) exposition sprinkled throughout.

Yet all of this leads nowhere and only sets up character motivations and scenarios destined to be explored in future adventures, not this one. Even the climax doesn’t resonate, and no matter how final the decisions by some of the characters may prove to be, these sacrifices carry no weight and even less meaning.

The cast does what they can, especially Hodge and Brosnan, both of whom are excellent. But it’s not enough. Collet-Serra’s sojourn into comic book theatrics is tedious and never justifies its existence other than to suggest what’s on the horizon for DC’s catalog of heroes. In all its zeal to expand this universe, the film forgets about the here and now.

It’s going to be a hit. There will be sequels. This character will return. But that doesn’t change my reaction. Black Adam is a super-powered misfire. 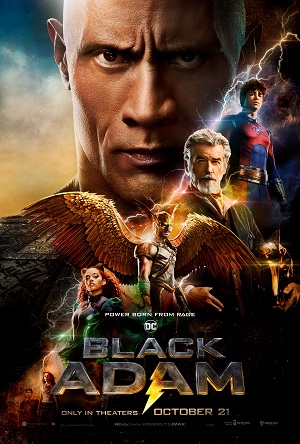