Morbius isn’t a bad movie. It also isn’t a particularly memorable one.

But its primary issue is that, much like so many non-Twilight and The Hunger Games YA adaptations from the 2000s and 2010s, titles like Eragon, Cirque du Freak: The Vampire’s Assistant, and The Mortal Instruments: City of Bones, it is engineered more to set up future tales than it is in building three-dimensional characters worth caring about. It is the dreaded prequel-to-a-sequel-that-will-never-come, and even though in this instance it’s safe to say that Dr. Michael Morbius (Jared Leto) will undoubtedly return, I’m still sure my meaning is clear.

Based on the comic book character created by writer Roy Thomas and designed by penciler Gil Kane, the film by director Daniel Espinosa (Safe House) gets credit for a bit more visual ingenuity than we’ve seen from most Sony-produced Marvel properties of late (Spider-Man: No Way Home, Venom: Let There Be Carnage). There are some boldly colorful flourishes, especially how the main character’s various unearthly powers are portrayed, and I found them suitably impressive.

I also found the unintentional initial transformation of Morbius into his bloodthirsty superhuman alter ego to be surprisingly effective. Espinosa leans into the same kinetic go-for-broke tenacity he brought to his 2017 sci-fi horror yarn Life, a demonic otherworldly assault on a team of heavily armed mercenaries aboard darkened container ship aggressively realized with hushed intensity.

Finally, there’s a splendidly loopy supporting turn from Matt Smith that had me grinning ear to ear. The former Doctor Who star plays Dr. Morbius’s childhood friend Milo and he is a looney hoot, greedily gobbling up each scene he appears in with malevolent, carnivorous relish. He brings energy to moments where it wouldn’t otherwise exist, doing such a fine job that he almost makes the film worthy of the matinee ticket price all by himself.

The basic plot is still your standard comic book superhero origin story, only with a few vampiric flourishes. Afflicted with a rare blood disorder that causes his body to grow increasingly frail and will one day kill him, the brilliant Morbius is on the verge of a cure. By combining vampire bat and human DNA, he believes he has created a serum that will restore him to perfect health.

With the aid of his assistant Dr. Martine Bancroft (Adria Arjona) and with Milo’s financial backing, Morbius tests his theories on himself in the secluded safety of international waters. That way, if anything goes wrong, no one can be held legally responsible if he were to inadvertently take his own life. But things go haywire in ways the physician couldn’t have anticipated: the serum leaves him seemingly cured of his affliction, possessing superhuman strength, and having an almost unquenchable thirst for human blood.

All of this would be fine if either Espinosa or his screenwriters Matt Sazama and Burk Sharpless (The Last Witch Hunter) appeared to care about what was going on or spent a bit more time fleshing out these characters instead of being overeager to race on to the next big thing. Morbius’s relationship with Bancroft happens the way it does because it has to for the plot to progress. The great Jared Harris pops in to add a hint of class and to vomit up some moralistic exposition, but that’s pretty much it. As for Tyrese Gibson and Al Madrigal as a pair of bumbling FBI agents, the less said about them the better.

No, other than showing who Michael Morbius is and the tightrope suspended between healer and destroyer he must perilously walk, everything that transpires is like some feature-length coming-attractions reel. It’s all fragmentary sentences and annoying cliffhangers, and while there is a climactic battle between once-familial friends now turned mortal enemies, even that is an unfinished symphony with first and second movements but only the smattering of a third, and it’s frustratingly lacking an allegro.

For all its stylistic flourishes, Morbius doesn’t have any bite. Considering this character’s background, that’s not a small issue. Heck, I’d go so far as to call it a bloody big one. 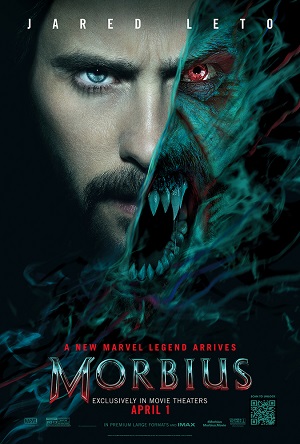