Black Panther: Wakanda Forever was always going to be a difficult balancing act for co-writer-director Ryan Coogler. After actor Chadwick Boseman’s tragic death in August 2020 from colon cancer, it was a given that the sequel was going to have to undergo a major overhaul if it was to continue the story begun in the Academy Award–winning 2018 smash. It was equally certain it would have to find a way to honor its departed star, and do so in a way that did not feel forced or facile.

On that second item, Coogler, the film’s cast, and its talented creative team succeed brilliantly. From its heart-stopping pre-credit prologue to its tearfully sincere closing images, Wakanda Forever does a stunning job of celebrating both Boseman and the character he brought to such vibrant life, Marvel superhero King T’Challa aka the Black Panther.

There is nothing dishonest about these moments. Not a single second comes across as insincere or melodramatic. The emotions fueling the scenes that directly reference T’Challa are handled with such poignant grace that I found it impossible not to be moved. Coogler gives Boseman a royal sendoff. He allows the audience to grieve as one and celebrate the indelible mark the actor made upon the cultural landscape. It’s an extraordinary achievement, and one the filmmaker should be justifiably celebrated for.

It is the reworking of the plot where this latest entry in Marvel’s cinematic universe falters. Not for lack of ambition, mind you. The scenario Coogler and his returning Black Panther collaborator Joe Robert Cole have concocted is nothing if not wildly ambitious. The themes at play are complicated and deep, fueled by a furious intensity born of historical atrocities and centuries of inhumane abuse that audiences will hopefully find eye-opening.

But it is the balancing of these elements where Coogler comes up short. The pieces do not fit comfortably together. Certain subplots only exist to set up future Marvel projects, padding the running time while also tearing the viewer’s attention away from the central conflict between Wakanda and the hidden undersea kingdom of Talokan. The climactic action set pieces have no urgency, and if not for the talented cast’s collective magnificence, these moments of comic book derring-do would have fallen entirely flat.

I do like the scenario Coogler and Cole have constructed a heck of a lot. One year after King T’Challa’s death from natural causes, his mother, Queen Ramonda (Angela Bassett), and sister Shuri (Letitia Wright) are still dealing with their grief. Attempts to move on are thrust aside, however, when a wing-footed stranger rises out of Wakandan waters to deliver an ultimatum. He is Namor (Tenoch Huerta Mejía), and he tasks Ramonda to find the whereabouts of an American scientist who invented a device that could unintentionally discover his people’s undersea sanctuary or risk open war between their civilizations.

What’s fascinating about this foundation is how uncomfortably forceful the themes Coogler is attempting to explore prove to be: Oppression. Slavery. Genocide. Imperialism. The systematic destruction of indigenous civilization by white colonizers over the centuries. The pitting of ethnic populations against one another by more powerful, and again majority-white, governments in pursuit of new weapons and greater influence on the world stage. All of this and more is given a voice. Not always a loud enough one, mind you, but a voice all the same.

There is a sensational sequence in which Namor takes Shuri to his home for a visit. She’s been captured while attempting to save the life of that aforementioned scientist — who turns out to be gifted teenager Riri Williams (Dominique Thorne), aka the future Ironheart — and the Talokan king wants to convince her to join him in a battle against the surface world. Not only is this segment hauntingly beautiful from a purely visual standpoint, but the conversations between Namor and Shuri also have a dynamic heft that the MCU has typically gone out of its way to avoid.

Almost all of the material focusing on returning CIA operative Everett Ross (Martin Freeman) is worthless and only serves to hint at future Marvel projects (notably 2024’s Thunderbolts with Florence Pugh, Sebastian Stan, and — I kid you not — Harrison Ford). But that stuff is annoying, not awful.

While those scenes don’t add anything meaningful to the production, it is when Wakanda and Talokan are forced to face off against one another that things start to frustratingly fall apart so egregiously. If not for a strong moment between Shuri and Namor during the heat of battle, it’s likely that none of what transpires during the climax would have worked for me at all.

This is unfortunate for many reasons, not the least of which is how casually Bassett, the sequel’s heart and soul, is so casually dismissed. But the rise of a new Black Panther? Riri’s mechanical ingenuity and expertise in discovering ways to combat Namor? The battle between General Okoye (Danai Gurira) and Talokan enforcer Attuma (Alex Livinalli)? The return of Nakia (Lupita Nyong’o) to Wakanda after a six-year absence after the events of the Snap? Precious little of this resonated, and therefore I found the impact of the final act to be borderline negligible.

Coogler aims high with Black Panther: Wakanda Forever, and when the director hits his target, it’s right in the absolute center of the bull’s-eye. But the misses add up, and they become increasingly more frequent as the film inches closer to its conclusion. I find I respect Coogler’s sequel more than I actually enjoyed it, and that’s as disappointing a turn of events as any I could have imagined. 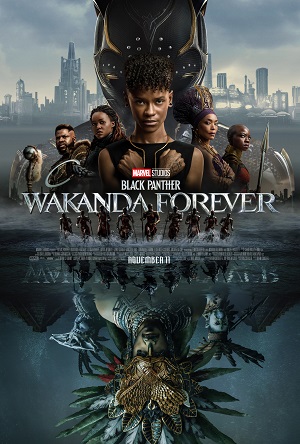