Ambitious Eternals Aims for the Stars

Over time, Eternals may become my favorite entry in the Marvel Cinematic Universe. Not best, mind you — it’s too scrappily chaotic for that to happen. But unlike so many of the other films that make up the bulk of this interconnected comic book series, this one is built on a foundation of big ideas and creative imagination. It is weird yet personal, unwieldy yet emotionally focused, making this ambitious sci-fi fantasy an invigorating time-bending travelogue I couldn’t take my eyes off of.

Academy Award-winning Nomadland director Chloé Zhao is a strange choice to take the reins of a Marvel opus, and it seems clear to me that there had to be at least some bickering between the filmmaker and the studio as to what the finished product was going to look like. Zhao’s down-to-earth, quietly humanistic approach is immediately at odds with the typical candy-colored bombast of most MCU ventures. Because of that, not all of the visual and narrative elements comfortably fit together.

No matter. Zhao, working with co-writers Patrick Burleigh, Ryan Firpo and Kaz Firpo, has taken comic impresario Jack Kirby’s certifiably peculiar source material and put her own indelible stamp upon it. Much of Ben Davis’ (Captain Marvel) richly minimalistic cinematography is reminiscent of the director’s past endeavors like The Rider. The use of natural light and practical sets — not to mention actual outdoor locations — is notable. This allows the various characters inhabiting the tale to be authentic, even with their intergalactic origins and godly superpowers.

More exciting are the themes Zhao explores. Issues pertaining to mortality, divinity, faith, family, friendship, gender and love are all plumbed. The biggest of these is a conundrum of epic proportions that potentially affects entire galaxies, not just the planet Earth or its human population. Questions of life and death lead directly to the birth of new worlds and fresh civilizations, destruction and creation walking apocalyptically hand in hand.

There is a lot of plot, and Zhao is unable to make cohesive sense out of all of it. The short version is that, 7,000 years ago, a group of otherworldly beings, the Eternals, was sent to Earth by the powerful Celestial Arishem (voiced by David Kay) to assist the newborn human population in their growth as a species. They are also there to fight against Deviants, powerful creatures that devour all they encounter. After completing this protective task, and once humanity has reached a point at which it can continue to independently evolve as a species, the Eternals are to sit on the sidelines and observe until Arishem calls them back home.

They are led by the maternally wise Ajak (Salma Hayek) who has the power to heal. After that, there are warriors Ikaris (Richard Madden), Kingo (Kumail Nanjiani), Gilgamesh (Don Lee) and Thena (Angelina Jolie), each with their own unique ability to combat Deviants. There is also the sorceress Sersi (Gemma Chan), who can transmute inanimate matter, the pint-sized illusionist Sprite (Lia McHugh), speedster Makkari (Lauren Ridloff), mind-controlling telepath Druig (Barry Keoghan) and master craftsman Phastos (Brian Tyree Henry), whose inventions will inspire humanity to new technological heights over the coming centuries.

While jumping back and forth through history, the crux of the plot takes place right after the events of Avengers: Endgame. While Tony Stark’s sacrifice brought back everyone Thanos had originally snapped out of existence, it also inadvertently brought about an apocalyptic event known as “The Emergence.” In seven days the Earth will be destroyed for new planets to be created; the Eternals must decide if they will allow this to happen or if they will instead disobey Arishem’s nonintervention edict and protect this species they have grown to love.

Most of this revolves around Sersi, and Chan is up to the challenge of placing this massive epic upon her shoulders. After having done such a splendid job of seductively stealing so much of Crazy Rich Asians, she bursts forth as a major star here. Chan’s emotional convolutions are palpable, and I thoroughly enjoyed watching her physically and internally wrestle with the ramifications of her character’s decisions.

As for the rest of the ensemble, Lee, Jolie, Nanjiani and Henry are the chief standouts each putting an indelible stamp on the proceedings. The rest are also quite good in their respective roles; they just don’t always get the opportunity to shine the same way their costars do. Madden might be the only one I slightly question, but that has more to do with the way Ikaris is so frustratingly written than anything else. But the actor does what he can, and it should be noted that his fiery chemistry with Chan burns right through the screen.

My core issues are the moments when Zhao has to bow to MCU convention. While the visual effects are as solid as ever, because of the realistic, lived-in shooting style, the sudden bursts of computer-generated augmentation can’t help but stand out. Rich, lifelike colors give way to a digitized video game aesthetic that’s jarring, and I cannot say I found any of it appealing.

Then there are the actual superheroics. It does not help that many of this team’s powers resemble those utilized by the X-Men, making comparisons between this group of Eternals and the students at Professor Xavier’s School for Gifted Youngsters almost unavoidable. With rare exception, their battles against the Deviants aren’t very memorable, and save for a climactic clash featuring Thena and a particularly crafty adversary, my excitement level during these moments never ascended all that high.

Like almost all entries in the MCU, there’s too much time spent on foreshadowing and not nearly enough on closing out this specific story as its own thing. The last few minutes emit serious Guardians of the Galaxy vibes, and as much as I enjoy both of those two James Gunn–directed adventures, this is still a tonal shift I did not jibe with.

But I like these characters. I responded to their existential quandaries. I loved the sometimes ugly and unpleasant ways they were all forced to work out their differences. They felt like a real family, their collective messiness making each one of them all the more genuine. It is through their internal disagreements that hard, unbreakable truth can be found, and that is the core dynamic that kept me wanting to see what was going to happen next no matter what else may have been going on.

Eternals shoots for the stars, and if the finished feature isn’t quite out of this world, it’s still close enough to getting there that my interest in seeing where these characters go next is exceedingly high. I say give this one a look. 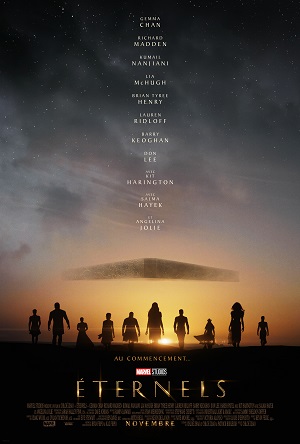