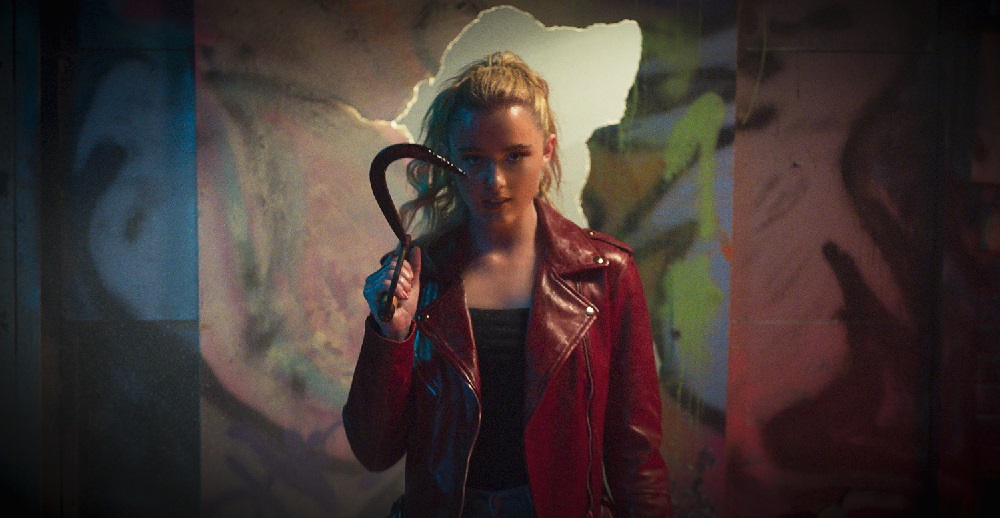 Body-swap horror-comedy Freaky is a lot of fun. It also isn’t anywhere near as consistently delightful as either of co-writer and director Christopher Landon’s Happy Death Day films were. There is a moderate level of inconsistency in regards to tone and delivery that at times left me wanting more. Still, thanks to terrific performances from stars Kathryn Newton and Vince Vaughn, this is a lively and inventive slice of genre goofiness I found very easy to enjoy.

The plot is fairly simple. After high school senior Millie (Newton) is stabbed by the notorious Blissfield Butcher (Vaughn) with an ancient Aztec sacrificial dagger, the two magically switch bodies. Now he is her and she is him. After convincing best friends Nyla (Celeste O’Connor) and Joshua (Misha Osherovich) she is who she claims to be and not a gigantic middle-aged man who also happens to be a bloodthirsty serial killer, Millie has less than 24 hours to stab her old body with the Aztec dagger before this switch becomes tragically permanent.

Newton and Vaughn are superb. Each plays the other’s character perfectly. The latter gets to cut loose comedically in a way he hasn’t in ages, the Wedding Crashers and Dodgeball star clearly having a blast channeling his mystified inner high school girl. But it is Newton who steals every scene. The Blockers actress exudes that same chilling Vaughn menace that drove his performances in films like Clay Pigeons and Brawl in Cell Block 99. She’s mesmerizing, and whether brandishing a sinister grin while wielding a chainsaw or pluckily fighting for her life on a deserted football field, Newton delivers a triumphant star-making turn that’s nothing short of glorious.

Even though a strong case could be made all these characters exist inside one shared universe, I still cannot say Freaky deserves to be mentioned in the same breath as either Happy Death Day or Happy Death Day 2U. Landon and Michael Kennedy’s screenplay isn’t nearly as sharp, and there are elements sprinkled throughout that made me slightly queasy for all the wrong reasons.

There’s a hunt versus hunted sequence in a women’s locker room that unintentionally utilizes some fairly disagreeable stereotypes. Making things worse is that Landon, who is typically very good about cleverly commenting on issues of race and gender in the confines of his horror yarns, doesn’t seem to know entirely how to do so here. As such, the requisite kill that happens at the end of this scene falls uncomfortably flat, Millie’s terrified reaction (while now in the Butcher’s body) not nearly as powerful as it should have been because of this.

Where Landon excels, however, continues to be in character interactions. The core trio of Millie (no matter which body she’s in), Nyla and Joshua are crafted with care and attention to every detail. Their friendship is lived-in, utterly genuine, all of which makes their willingness to do whatever it takes for one another all the more believable. Additionally, even utilizing noticeable expository shorthand Landon gives equal care to Millie’s mother Coral (Katie Finneran) and her older sister Charlene (Dana Drori), the family’s backstory handled with a beguiling observational empathy that makes rooting for their collective survival easy to do.

On a technical front this is another triumph for the filmmaker. Frequent collaborator Bear McCreary (Godzilla: King of the Monsters) delivers a bouncily vibrant score, while editor Ben Baudhuin (Black Christmas) and cinematographer Laurie Rose (Kill List) are both at the top of their respective games. The gore and makeup effects are outstanding, while a couple of the kills (including one with a table saw) had me giggling in glee even as they fittingly grossed me out.

I think Landon and Kennedy could have crafted a sharper script. They don’t have a handle on all of the various themes they present about gender and identity, and while most of the steps that are taken throughout are undeniably progressive, that doesn’t make the backward ones any less frustrating.

Still, mainly due to the talents of Newton and Vaughn, Freaky almost can’t help but entertain. It’s an imaginative body-swap horror-comedy where thrills and chills relax comfortably alongside giggles and guffaws with intoxicating grace. Even better, it also has heart. I cared about what would happen to Millie, her friends and her family, and no matter which body she was in, her ferociously feminine determination to persevere kept my eyes glued to the screen. 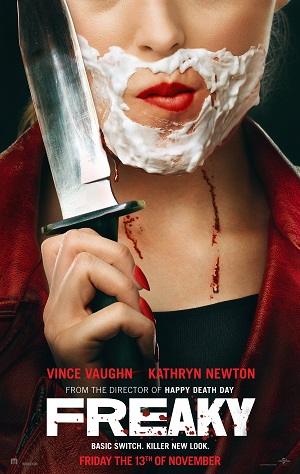