Emotionally Mechanical Soho a Psychedelic Trip Through the Looking Glass

Edgar Wright’s (Shaun of the Dead) trippy Last Night in Soho is a pastiche of classic psychedelic terror and grimy, sexually-charged thriller ideas gleefully culled from Hammer horror films, Hitchcock staples, Mario Bava and Dario Argento favorites, 1960s pop music and fashions, and so many additional influences it’s impossible to list them all. His latest is a candy-colored whodunit of perception and identity, one that cleverly slips through the looking glass and back again with energetic ease.

Unfortunately, it’s also more of a technical marvel than it is an emotionally involving one. Characters are rarely allowed the freedom to breathe, most coming across as plastic figurines to be swiftly moved across a phantasmagoric chessboard than live as human beings worth caring about. It is only by the sheer charismatic strength of Thomasin McKenzie, Anya Taylor-Joy and the late, great Dianna Rigg that this one registered with me at all, and without the presence of these three talented ladies I’m not sure there’d be much worth talking about.

Eloise (McKenzie) is a fashion student from Cornwall who has come to London ready to see her dreams become a reality. Obsessed with the 1960s and overflowing with talent, her designs have an inspired retro flair that makes her immediately popular with her instructors, while also drawing the ire of some of her fellow students.

Unhappy in the school dorms, Eloise takes an upstairs room in Soho rented to her by the stern Ms. Collins (Rigg), and quickly makes the place her own. She is also a bit of an amateur psychic, possessed with an ability to see images of the past staring back at her from almost any reflective surface.

It’s at this point where Wright and co-writer Krysty Wilson-Cairns’ (1917) intricately convoluted screenplay kicks into high gear. When things are going well, Eloise typically sees images of her deceased mother smiling back at her. Today, Eloise is having visions of Sandie (Taylor-Joy), a gorgeous young woman about her age who came to London in the 1960s with aspirations to become a star.

Did she, though? Was her apparent romance with promoter and manager Jack (Matt Smith) the idyllic first step to achieving her dreams? Or did something more ominous take place? A descent into madness, abuse and despair, all of which concluded in a bloody scene of torture and murder right in the very apartment Eloise currently calls home?

Past and present zip back and forth, Wright juxtaposing current events with past terrors to tell a tale of self-determination overcoming patriarchal oppressions and inherently sexist hierarchies that were left to fester and grow in the foundation underneath Soho for over half a century. Eloise must solve the mystery of Sandie and Jack’s violently cantankerous relationship without going insane herself, doing so with a plucky determination that would make everyone from Nancy Drew to Jessica Fletcher to even Miss Marple proud.

As a visual exercise, Last Night in Soho is marvelous. Chung-hoon Chung’s (Oldboy) neon-lit cinematography is reminiscent of Ridley Scott’s neo-noir output of the 1980s, most notably Someone to Watch Over Me and Black Rain, while production designer Marcus Rowland (Rocketman) melds past a present with mesmeric precision. Steven Price’s (Gravity) excellent score beautifully intermingles with a strong soundtrack made up primarily of ‘60s pop sensations. Best of all is Odile Dicks-Mireaux’s (Brooklyn) incredible costumes, her designs meshing time periods together into a glorious mélange of color and movement that’s sublime.

It’s the storytelling that I have a problem with. Everything feels too mechanical, too orchestrated. Wright seems so excited to be pulling from – and paying homage to – so many varied influences precious little about any of this actually feels real. It’s like watching immaculately coifed mannequins sprint to and fro, and while they look magnificent, that does not mean I cared about much that was happening or what the solutions hiding within this time-traveling puzzle box were going to be.

What Wright does have working for him are the performances of his three primary stars, McKenzie, Taylor-Joy and Rigg. Each gives themselves over to the material, and watching how they all manage to work is such hypnotic tandem, even though one of the trio’s characters is distanced from the other two by almost six decades, is glorious. Rigg is particularly spellbinding, and even though her appearances are brief, the way her Ms. Collins transforms into a potently fascinating focal point is wondrous to behold.

Last Night in Soho is too well-acted and far too technically imaginative for me to dismiss what Wright has done here. But for right now, this murderous time machine connecting the swinging sixties with the world of today is too emotionally aloof for me to be able to happily dance to its retro rhythms. The beat just felt a little off, and I can’t say I think that’s going to change if I were to give this one a second chance to win me over in the future. 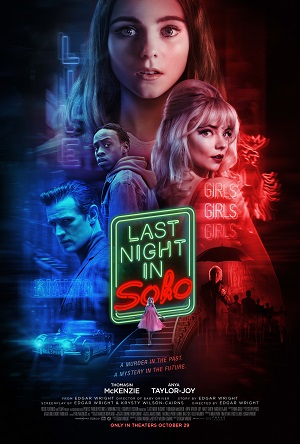