Journalism Procedural She Said Investigates the Case Against Weinstein

Based on articles written by New York Times reporters Megan Twohey and Jodi Kantor in 2017, the investigative journalism procedural She Said is as enthralling as it is infuriating. Enthralling because it is a superbly acted, meticulously crafted drama, precisely edited to within an inch of its life by Hansjörg Weißbrich (7500) and scored to perfection by Nicholas Britell (Moonlight). Infuriating because, while Harvey Weinstein ultimately was held accountable for his abhorrent actions, it still feels like powerful men seldom will, no matter how ugly, despicable, and unforgivable their crimes may be.

That latter item isn’t the movie’s fault. That’s just society taking its sweet time to change, and as is so often the case, a few steps of forward progress leads to a mad rush in the opposite direction. Hopefully this backpedaling will be short-lived, even if disheartening. But with current events being what they are, it’s hard to look at these victories and wonder if they have any lasting value — a frustrating and unfair reaction on my part, to be sure.

With that out of the way, I’ll say that the first English-language production by director Maria Schrader (I’m Your Man) is quite good. This is a solid, fast-paced procedural centering on two excellent performances by leads Carey Mulligan and Zoe Kazan, while also featuring a bevy of strong supporting turns from an all-star ensemble, including Ashley Judd as herself. Andre Braugher, Patricia Clarkson, Jennifer Ehle, and a mesmerizing Samantha Morton — making the absolute most out of no more than maybe ten minutes of screen time — are all exemplary, with signature moments of such raw, startlingly genuine power that they collectively knocked my socks off.

The film follows the New York Times investigation into Academy Award–winning Miramax head Harvey Weinstein and his indiscretions with women — including the alleged rape of Rose McGowan — during the 1990s. The determined journalist Jodi Kantor (Kazan) takes the lead, speaking with actors like McGowan and Ashley Judd on deep background to get her started. She is later joined by seasoned veteran Megan Twohey (Mulligan), who in 2016 broke stories on Donald Trump’s numerous accusers, and her skill at getting women to open up about their traumatic experiences is particularly suited to this sort of investigation.

In Spotlight, All the President’s Men, and Call Northside 777 fashion, what follows is a step-by-step accounting of what the two journalists went through to break their front-page story in October 2017. Schrader and screenwriter Rebecca Lenkiewicz (Colette) follow the breadcrumbs, and the resulting film stands back so as to keep from intruding on the drama the narrative inherently possesses.

Schrader and Lenkiewicz don’t embellish. They refuse to let sentiment drip into the proceedings with anything approaching forcefulness. While subplots concerning the birth of Twohey’s daughter and her postpartum depression or Kantor’s difficulties at home raising her own kids and trying to maintain a work-life balance are part of the narrative, none overshadow the Weinstein investigation. Instead, these asides add authentic and much-needed complexity, and I liked the unvarnished bluntness of Schrader’s handling of these moments.

This is also a “telephone and computer screen” motion picture, in that much of the running time is spent watching people chat on their cellphones or typing away furiously on their laptops as they attempt to put the pieces of the Weinstein puzzle together. Schrader can only do so much with scenes like these, and after a while, seeing Kantor urgently drop everything because she “has to take this call” does get old. But the documentary-like framing by cinematographer Natasha Braier (The Rover) is outstanding, and the visual exactitude of her camerawork is sublime.

Everything builds to the story’s publication, when Weinstein and his cronies are put on the spot as they try to defend, deflect, and explain his actions. Moments where sources make the difficult decision to go on the record are thrillingly exhausting, but Schrader keeps the focus squarely on Kantor and Twohey as they react to each new revelation.

As I’ve already mentioned, it is difficult to watch She Said and feel like this examination of Harvey Weinstein — which helped lead directly to his first- and third-degree rape conviction in 2020 — has had any lasting impact. That does dilute some of the film’s power.

But it’s still a strong, captivating drama overflowing with memorable moments. Schrader and Lenkiewicz bring a fearless tenacity to the project that’s uncompromising in its observational exactitude. If someone as powerful and ruthless as Weinstein can be held accountable, maybe more figures like him can be as well. Here’s hoping that is indeed the case and not just the loud yowling of valiant figures senselessly tilting at windmills. 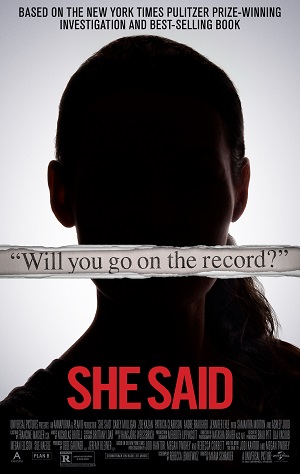