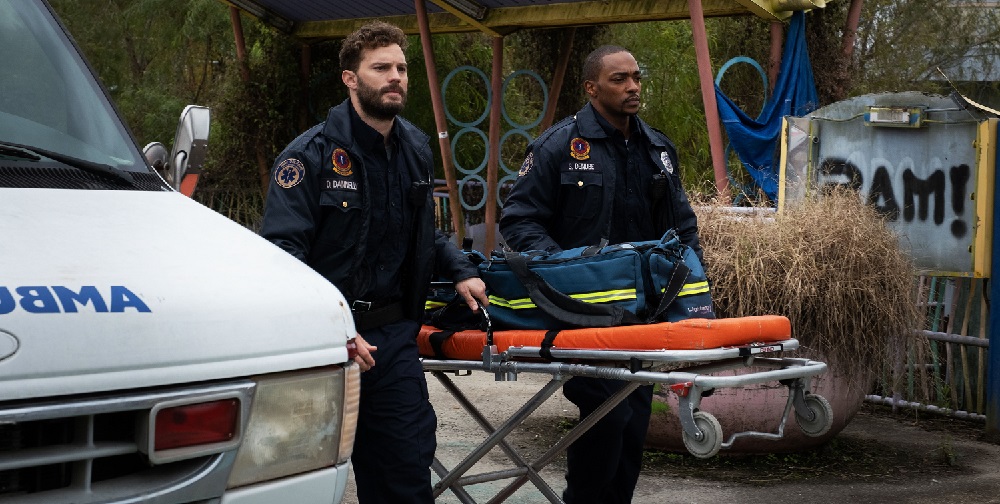 Groovily Psychedelic Synchronic Worth Getting Addicted To

While the setup to Synchronic is relatively straightforward, leave it to the talented duo of Justin Benson and Aaron Moorhead to flip things on their head, spin them sideways and then do backflips out the door as they tinker with the interior mechanics of their film’s time-bending, trippily surrealistic narrative. The minds behind The Endless, Spring and Resolution once again challenge their audience while pulling out all the stops in their pursuit to entertain, doing so with jubilantly spectacular aplomb.

Two New Orleans paramedics and best friends, Steve (Anthony Mackie) and Dennis (Jamie Dornan), haven’t been having the greatest time. Every call is stranger and far more gruesome than the last. All apparent accidents, each event they’ve been sent to there is also the remnants of a popular new party drug. Things get even more bizarre when Dennis’s eldest daughter goes missing and Steve starts experimenting with the drug to learn about its dangers, two seemingly disconnected events that have more in common than it initially appears.

Much like the pair’s previous endeavors, I think less is more as far as trying to explain details about this film’s labyrinthine plot is concerned. Just know this one isn’t nearly as convoluted as it might sound. Even dealing with time travel, various plains of existence and parallel dimensions, this is arguably Benson and Moorhead’s most easily accessible effort yet. Once one gets with the vibe of the piece it’s pretty dang easy to follow along with what is happening, and for my part I never lost track of where I was or what was going on even when it looked as if Synchronic was going to surrealistically spiral out of control.

It helps considerably that the two primary characters are so three-dimensionally fleshed out. While at first it might look like the filmmakers are going to use a bunch of buddy action-comedy cliches as things pertain to Steve and Dennis, it quickly becomes clear this was all nothing more than a deft ruse to catch the audience unaware. Their goofy banter and macho posturing is a clever smokescreen. After laying the groundwork for this world the two inhabit, Benson and Moorhead pull out the rug from underneath the paramedics to reveal deeper truths and impenetrable mysteries that are as emotionally affecting as they are psychologically stimulating.

This ends up being a movie about grief. About loss. About failed dreams and missed opportunities. It also is a story about friendship. About family. About fatherhood and marriage. Mostly it is about love. Not romantic love (although I guess there is an element of that), mind you, but a type of love that’s far more expansive and much more empathetic than one expects to find in a twisted time travel puzzle box of a thriller overflowing in humor, excitement, terror and suspense. This is the very soul of Benson and Moorhead’s loopily chaotic baby, and almost without my realizing it, the pair had grabbed a hold of my heart so firmly I almost didn’t want them to ever let go.

This is one of Dornan’s best performance, the Fifty Shades punching bag doing a wonderful job showcasing all of Dennis’ emotionally anarchic permutations. He has a couple of scenes with Katie Aselton (portraying his harried wife Tara) that took me by surprise, and even when he’s saying precious little the actor is still able to convey so much through the use of his body movement and facial tics alone.

Mackie is even better. This might be the actor’s finest hour, maybe even surpassing his stupendous work in The Hurt Locker. As the one who decides to investigate the effects and dangers of this drug no matter what the consequences, it is Dennis who has to do a lot of the expository heavy lifting. Much of the bewildering carnage and awe-inspiring wonders are seen directly through his eyes, and as such Mackie is forced to be the central guiding light around which everything revolves.

There’s plenty more to add, including comments about Jimmy LaValle’s (The Endless) effectively hypnotic score and the subtly terrific performance from Ally Ioannides (she plays Dennis’s missing daughter Brianna). But I think I’m going to leave things here. Benson and Moorhead have designed a time travel excursion into the unknown where it’s best to discover all its twists and turns without any unnecessary spoilers from me, Synchronic a groovy psychedelic hallucinatory delight worth getting addicted to. 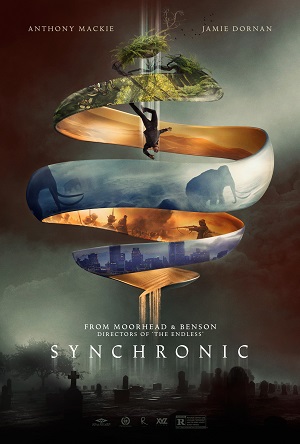