Seven miles underwater, the crew of the Kepler mining operation are having a bad day. Their massive housing and administration complex is rapidly imploding. While an act of quick thinking by mechanical engineer Norah (Kristen Stewart) slows this impending tragedy down it does not stop it entirely. With Captain Lucien (Vincent Cassel) already jettisoning the working escape pods with the few survivors he could find, those still aboard are going to have to work together to find an alternate way to the surface if they are going to live.

Norah, Lucien, marine biologist Emily (Jessica Henwick), operations manager Smith (John Gallagher Jr.), systems manager Rodrigo (Mamoudou Athie) and mechanic Paul (T.J. Miller) are going to have to walk along the ocean’s surface all the way to the company’s drilling platform in hopes its escape pods are still in working operation. What they do not know is that they are not alone. The actions of the Kepler’s crew have inadvertently unleashed something monstrous, and to say it isn’t friendly would be a titanic understatement.

If nothing else, William Eubank’s (The Signal) appropriately titled undersea creature-feature Underwater wastes zero time putting its cadre of characters in mortal danger. The Kepler begins falling to piece just moments after Norah finishes brushing her teeth and seconds before she can even put on her shoes. Within the first five minutes she and Rodrigo are running for their lives and unburying Paul from the rubble before running across their Captain nursing a sprained shoulder in the escape pod bay. From there it is up to the crumbling command center to snag Emily and Smith before the six get into their armored diving suits and begin their trek to the drilling platform.

Needless to say, Brian Duffield’s (Jane Got a Gun) and Adam Cozad’s (The Legend of Tarzan) economical script isn’t exactly big on exposition, and as far as I’m concerned that’s a good thing. Eubank allows each character’s various quirks, idiosyncrasies and their backstories to come through via set design, costumes and most importantly each actor’s performance. We get to know who they are through how they deal with this catastrophe, and in doing so I found I knew much more about them by the time the film culminated than I initially thought I did. This becomes an intense adventure that overflows in giddy suspense, the anxiety I felt while watching it a constantly enjoyable surge of unbridled adrenaline that kept me entertained.

Not that we’re talking mysterious sea creature suspense-thriller magnificence here. On a scale of The Rift to DeepStar Six to Leviathan to The Abyss, I’d say Underwater is more like an Alien-infused Deep Rising more than it is anything else. The movie’s ambitions aren’t lofty, and Eubank’s seems far more interested in channeling his inner Roger Corman than he is in being a James Cameron or Ridley Scott clone. The director isn’t afraid of tossing out a flurry of effective jump scares and ruthlessly dismembering his cast one-by-one in suitably grizzly fashion. There aren’t a lot of real surprises, save maybe as it pertains to the body count and who the eventual survivors are, but neither of those items are all that shocking enough to be considered entirely unexpected, either.

But even that being the case I still enjoyed this thriller a whole heck of a lot. I may not have been a huge fan of his 2014 cult favorite The Signal or Eubank’s inventive 2011 debut Love, but that doesn’t mean I still couldn’t see his fierce directorial chops clear as day. He has a strong eye for visuals, and I love how he doesn’t treat his actors as props and instead trusts them to sell the emotional content of his stories without any showy melodramatic self-indulgence on his part. Eubank also ratcheted up tension in a manner that dug so far underneath my skin it burrowed into the marrow, a skill set I’m more than happy to applaud.

I honestly haven’t the first clue what convinced Stewart to be in this movie, but that’s another coup for the director as far as I’m concerned because, much like she was in last November’s Charlie’s Angels, the actress is wonderful first scene to last. The best moments are the ones with Norah off on her own trying to survive in isolation, the actress conveying so much about her character with the movement of her body and the timbre of her voice as it calls out into the darkness seeing if any of her crewmates are still alive. I was enthralled by what Stewart was doing, the climactic scenes of her staring down the monster that destroyed the Kepler while fighting for the lives of her remaining friends worth the price of a matinee ticket all by itself.

Other aspects worthy of praise include Marco Beltrami (The Hurt Locker) and Brandon Roberts’ (The Axe Murders of Villisca) innervating score, Naaman Marshall’s (Stuber) crackerjack production design and Dorotka Sapinska’s (The Signal) authentically weathered costumes. There’s also something to be said about Leandre Lagrange’s (Godzilla: King of the Monsters) imaginative creature designs, and even if the final baddie reminded me a little too much of the aforementioned Deep Rising I still found her Lovecraftian monsters to be invigorating nightmare fuel that will only positively grow on me more and more over time. Underwater gets the job done. I liked it a lot. Heck, I’m likely to head to the theatre and see it again before January ends. 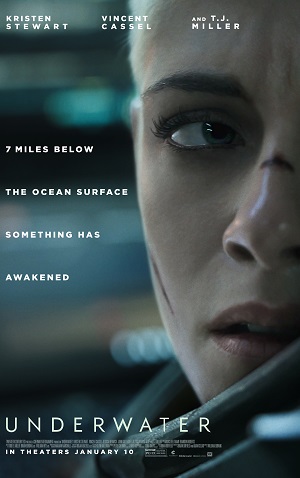