TWENTY-FIVE MORE (because I can) – Part One

Eva Green gives the performance of a lifetime as an astronaut training for a year-long mission as part of the new crew heading to the International Space Station. Zélie Boulant is equally outstanding as the daughter who forces her mother to weigh all the costs, pro and con, of working so hard to achieve her interstellar dreams.

Remi Weekes’ insidious tale of an immigrant Sudanese couple in the United Kingdom dealing with the repercussions of their escape from their home country and the perils of trying to immerse themselves into British society is emotionally gut-wrenching enough all on its own. Throw in a potentially haunted new home the government forces the pair to live in for the next year, and all bets are unsurprisingly off.

Few films filled my heart with as much unimaginable joy as Jessica Swale’s Summerland. The way the filmmaker crafted her shamelessly sentimental puzzle box of a British WWII homefront story worked for me, each piece fitting together so perfectly the climactic reveal felt genuine in a way that caught me by surprise. Loved this one to bits. [Interview with writer/director Jessica Swale]

This unexpected gem of a Groundhog Day variation revolving around two members of a Palm Springs wedding party forced to live the same day over and over again whether they want to or not overflows in ingenuity and imagination. Andy Samberg and Cristin Milioti are delightful, while J.K. Simmons delivers a relatively unheralded supporting performance that ranks right up there with 2020’s best.

Julia Hart’s bravura 1970s crime-thriller as intensely spellbinding descent down the rabbit hole featuring a pair of irresistible performances from Rachel Brosnahan and Marsha Stephanie Blake that grow intimate complexity as events progress. The last 30minutes are a dynamic powder keg of emotional devastation and subsequent resurrection that had me rising to my feet to cheer.

Brandon Cronenberg’s gruesome body-horror thriller is a cagey treatise on identity that rarely goes where one expects it to. Andrea Riseborough, Christopher Abbott and Jennifer Jason Leigh are all excellent, each giving cleverly multifaced performances that mirror the film’s central themes nicely. It all builds to one of 2020’s most unforgettable climaxes, and after it was over I sat in shocked wide-eyed silence as I pondered everything Cronenberg had just shown me.

The thing about Bacurau is that it changes its identity from one scene to the next almost as if directors Kleber Mendonça Filho and Juliano Dornelles were allowing their talented cast of familiar faces and talented newcomers to make things up as shooting went along. But like everything else in this brutal, bloody and thrillingly funny shell game nothing is as it appears, and that’s absolutely how it should be.

I was late to the game on Spike lee’s latest angrily focused return-to-Vietnam epic, and I have this sneaky suspicion that this is one film on my list that is only going to improve considerably on re-watch. The powerhouse cast does no wrong, but it is the relationship between Delroy Lindo and Jonathan Majors as an estranged father and son that affected me most.

I think this excerpt from my 7/10/20 review sums it up best: “Natalie Erika James’ hauntingly personal horror yarn Relic refuses to let go. It attaches itself to the viewer with insidious authority, wrapping its cold, clammy fingers around the wrist with such methodic grace I almost didn’t notice it was happening. This movie shook me to my core.”

Riz Ahmed delivers a volcanic performance as a determined heavy metal drummer who to his horror discovers he’s suddenly losing his hearing. Paul Raci is equally phenomenal as the man who runs a sober house for deaf addicts currently in recovery and looking for community. Featuring imaginatively immersive sound design that captured my senses whole, Darius Marder and his talented team have crafted a visionary drama unlike any other 2020 had to offer.

For anyone who felt filmmakers Severin Fiala and Veronika Franz’s 2014 Goodnight Mommy was too warm and fluffy (it wasn’t), it’s unlikely they’ll feel even close to the same about the pair’s follow-up The Lodge. This is a frigidly damning psychological brain-twister that wraps around the viewer like an ever-tightening noose. The film’s final images are burned into my brain forever, the never-ending terror spawned by a series of terrible decisions an icy conclusion to an already horrifying ordeal.

This Russian WWII melodrama centered on two young nurses working in Leningrad, both former soldiers themselves, is a brazenly bleak as they come. Death. Love. Despair. Lust. Desperation. Tragedy. All of this and more lurks around every corner. But these women are so magnetically compelling and their stories so heartbreakingly personal watching their story unfold is a depressive pleasure that grows in thought-provoking triumphant majesty the closer it comes to a conclusion.

There’s not a lot to Kitty Green’s The Assistant, the personal assistant to a big-time movie producer begins to suspect his dealings with young female employees is anything but kosher while dealing with various sexist and misogynist micro-aggressions from her male counterparts, but that doesn’t make it any less extraordinary. Julia Garner’s pitch-perfect performance is a constant revelation, the look on her face after she somehow finds the courage to report her observations only to see her words fall on deaf ears unequivocally earthshattering. 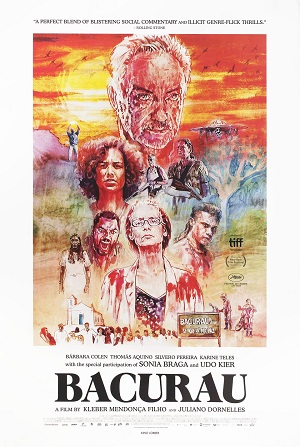