Spirited Call of the Wild an Animatedly Aggregable Adventure

I haven’t read Jack London’s seminal classic The Call of the Wild since middle school, so it’s safe to say my memory of it isn’t fresh. That said, other than a few obvious changes (most involving the gender and racial identity of some of the book’s more, shall we say “problematic,” characters), none of which are what I’d call subtle, and a rather kid-friendly POV, I can’t say that I feel there’s much to complain about as far as Michael Green’s (Logan) confident screenplay is concerned. I never felt as if there was anything other than a solid respect for the source material, the writer’s ruggedly old school presentation of the narrative’s core aspects working beautifully.

The question mark for most viewers will undoubtedly be how director Chris Sanders (The Croods) and his talented creative team chose to visually showcase the material. While the film is populated with recognizable human actors, most notably superstar Harrison Ford as wearily grizzled Yukon prospector John Thornton, the majority of the animal characters, specifically massive four-legged main character Buck (memorably described in London’s book as a St. Bernard/Farm Collie hybrid), are a mixture or performance capture and digital animation. It’s an interesting combination and one that, to me at least, does not always work, the seams between what is animated and what is practical frequently showing.

But there is just as clearly something to be said positively about this approach. Unlike say the photorealistic animation of last year’s The Lion King remake, the creatures in this motion picture can convey honest emotion and do so with haunting effectiveness. While there is narration, unlike other animal-centered adventures like The Incredible Journey there isn’t an overabundance of it. Additionally, unlike past adaptations of London’s story (like the Clark Gable classic from 1935 or the Charlton Heston version from 1972) things can remain centered on Buck in a way they frankly never have before.

I liked this about Sanders’ film. It was almost as if I were truly seeing this Yukon world through Buck’s eyes, that I was trotting across the frozen tundra or running alongside a pack of hungry wolves right there next to him. It brought to life Buck’s journey for me in manner I hadn’t anticipated, reminding me of what it was like to read of the dog’s adventures back in my youth and silently thrill at the possibility of what it could have been like to head out and forge a new path into the unknown back during the tail end of the 19th century.

Not that all of the news is positive. Other than Thornton, who is sort of a consistent presence even if he and Buck don’t officially join forces until about halfway through, the remainder of the human cast do not get the opportunity to make a similar impression. The closest to doing so are Omar Sy and Cara Gee as the owners of a postal delivery dogsled team who first teach Buck about leadership and responsibility, both actors making the most of their limited screen time. But the rest? They’re mostly hung out to dry, familiar faces like Bradley Whitford (as Buck’s original owner) and Karen Gillan (as a spoiled aristocratic prospector who along with her brother is exceedingly ill-prepared for life in the Yukon) gone so quickly from the story if one blinks they’ll likely miss the both of them.

Then there is Dan Stevens. He’s portraying the brother of Gillan’s character, Hal, and his is a problematic villainous performance that’s more cartoonish than the film’s digitally animated animals are. While Stevens isn’t necessarily bad, it’s equally clear this character has been reengineered in such a manner to erase some of the more culturally and racially insensitive aspects of London’s book, most of which would not play particularly well (for justifiable reasons) here in 2020. As such, Hal is a violently over-the-top oaf who grows quickly tiresome yet still must make several appearances, especially if the ending of film is to remain true to the source material. I kind of loathed having him around, and as impressions go this isn’t the one I imagine Stevens was trying to make.

Yet I still rather enjoyed this new The Call of the Wild. Ford is terrific, veteran cinematographer Janusz Kaminski (Saving Private Ryan) shoots the material with meticulously expansive attention to detail and composer John Powell (How to Train Your Dragon: The Hidden World) contributes a suitably rousing score that augments the on-screen action nicely. Special mention must also be given to actor Terry Notary who was the motion capture reference for Buck, and much like he’s done in the past playing Kong in Kong: Skull Island and Rocket in all three of the recent Planet of the Apes adventures, he adds a layer of emotional authenticity that’s outstanding. Sanders’ film proved to be an outdoor adventure worth going on, and I can’t help but think my 10-year-old self would have seen this in the theatre a good half-dozen times if my parents would have permitted me to do so. 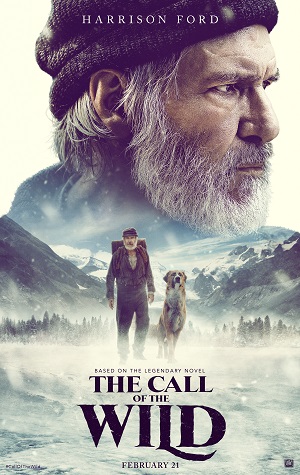