Pixar’s latest animated gem Luca made me feel good. The film wasn’t anything unique. It did not do anything too unpredictable. It didn’t innovate the same way other efforts from the studio – hits like Toy Story, Finding Nemo, WALL•E and Inside Out (just to name a few) – have in the past.

But none of that means Luca does not impress. It showcases a gentle heart and displays a level of empathetic grace that’s consistently enchanting. Director Enrico Casarosa and screenwriters Jesse Andrews (Me and Earl and the Dying Girl) and Mike Jones (Soul) treat their characters as well as their audience with intelligence and respect, delivering a story of acceptance, identity and forgiveness viewers young and old are almost certain to be able to relate to.

Luca Paguro (voiced by Jacob Tremblay) is a 13-year-old boy who must spend the summer shepherding his family’s flock. A chance meeting introduces him to fellow youngster Alberto Scorfano (Jack Dylan Grazer) and the two become instant friends. Alberto lives alone while his father is away and dreams of owning a Vespa so he can hit the road and explore the world. Luca, his thirst for knowledge impossible to quench, is inspired by his new friend’s ambitions and promises to do whatever he can to help make them a reality.

Oh. One more thing. Luca and Alberto are sea monsters.

Not that they would call themselves “monsters.” Far from it. But, out of the water and dry, they can look like a normal human, allowing Luca and Alberto to walk around the small fishing village of Portorosso with no one none the wiser about their true form. It is here they make friends with red-headed outcast Giulia Marcovaldo (Emma Berman) and her gruff fisherman father Massimo (Marco Barricelli), the trio of youngsters making a pact to compete together in the town’s annual summertime race, the Portorosso Cup.

Many of the expected hijinks ensue, Luca and Alberto giving everything to fit in as human, even going fishing with Massimo, the constant danger that they could be accidentally splashed with water revealing their true identity a constant worry. There’s an older boy, Ercole Visconti (Saverio Raimondo), who wins the Portorosso Cup year after year and bullies Giulia, and he’s not above adding the two newcomers to his list of targets on the off chance that they could threaten his reign as champion.

Not much more happens. The film becomes an allegory for tolerance and understanding. Luca’s parents have to learn that their son has his own dreams free of their wants or desires for his future, while the inhabitants of Portorosso need to look into a mirror and understand the true monster is their own fear of the unknown staring back at them. That’s pretty much all there is to it.

You know what? That’s just fine. In fact, it’s borderline wonderful. Andrews and Jones have crafted a delightfully compassionate script rich in emotional honesty. They never shy away from the heavier or more heartrending travails fueling some of the decisions Luca, Alberto and Guilia might make. In the same moment, it also allows their friendship to blossom in such a way that the trio’s ability to overcome these potentially disastrous obstacles is blissfully authentic.

It’s all rather beautiful, and when coupled with Pixar’s trademark extraordinary animation and the superb vocal performances by the entire cast, let’s just say a cheerfully teary smile sat on my face for almost every second of the feature’s briskly paced 95 minutes. For younger audiences, there’s so much for them to take away from Luca and Alberto’s journey. Better, Casarosa refuses to allow the film to either preach or to talk down to them, each life lesson happening with such naturalistic subtlety they appear almost as if out of nowhere.

Some movies exist as if solely to make the viewer feel good. They’re not masterpieces. They’re not game-changers. They don’t do anything unexpected. They just touch on basic universal themes that warm your heart and bring a smile to your face. That’s Luca, and that’s wonderful. 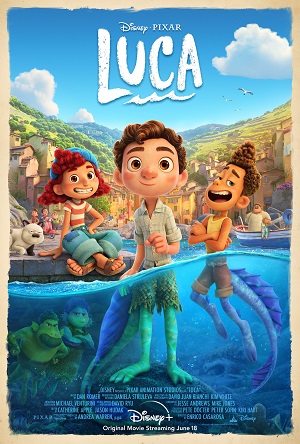