The 355 is a passable action programmer that will play fine at home when it’s eventually airing on TBS or TNT multiple times throughout a weekend. Jessica Chastain, Lupita Nyong’o, Penélope Cruz, Diane Kruger, and Bingbing Fan are a decent team of spies, and director and co-writer Simon Kinberg (X-Men: Dark Phoenix) manages to stage a couple of well-orchestrated set pieces where things go boom with suitable flair.

But none of this is particularly memorable. It may be nicely shot by Tim Maurice-Jones (The Woman in Black) and efficiently edited by John Gilbert (Adrift) and Lee Smith (1917), and while I was moderately fond of Junkie XL’s (Mad Max: Fury Road) – aka Tom Holkenborg – energetic score, it’s not like the film goes anywhere unexpected. There’s not an original bone in this globe-trotting thriller’s body, the whole thing following the James Blond, Jason Bourne, or Mission: Impossible template so closely, it almost borders on plagiarism.

CIA spies Mace (Chastain) and Nick (Sebastian Stan) are tasked with procuring a powerful electronic device from a rogue Colombian operative (Edgar Ramírez) who doesn’t know how dangerous this tiny thingamabob actually is. Events go sideways when German spy Marie (Kruger) arrives on the scenes. They go even more lethally off the rails when Colombian government therapist Graciela (Cruz) is called in to try and ease tensions.

With events spiraling increasingly out of control and with each of their superiors cutting ties with the lot of them, Mace, Marie, and Graciela realize they must join forces if they are going to survive. They are joined by former MI6 electronics expert Khadijah (Nyong’o), a friend of Mace’s she coerced out of retirement. Now the four of them are in a world of hurt, and if they don’t recover the device, each woman is as good as dead.

The doodad they’re all after has the power to disrupt anything with an electronic circuit, including aircraft already in flight, but it’s really just a convoluted McGuffin utilized to bring the women together. They also cross paths with the mysterious Chinese counterespionage agent Lin Mi Sheng (Fan) not knowing whose side she is on. There are also a handful of double-crosses involving a couple of powerful men, while behind the scenes shady moneyman Elijah Clarke (Jason Flemyng) violently pulls the strings.

It’s as pointlessly convoluted as it all sounds, and at a skosh over two hours the film also takes itself far too seriously for as absurd as it is. Had this been a Hong Kong production from the 1990s or a Cannon Films effort from the 1980s, this would have been an economical 90 minutes, tops. Even as Kinberg presses down on the gas pedal the plotting goes to laborious lengths to keep things accelerating, one character even pointing out things could have been over long ago had any of the baddies killed the women when they had the opportunity instead of idiotically leaving them alive for no rational reason.

Not that I was ever bored. One set piece in a crowded Macao marketplace with Mace, Khadijah, Marie, and Graciela working together for the first time is suitably tense, and no matter how many directions each woman went off in I never lost track of where anyone was or what they were doing for the entirety of the scene. Later on there’s a rousing action sequence in a glitzy high-rise, Chastain hanging off the side of the building as if she were doing her best Tom Cruise impersonation and Fan showing off her athletic martial arts prowess with enthusiastic flair.

Can’t say any of that makes me think it’s worth rushing out to a theater to see The 355. Especially right now. This is a title that screams, “Watch me at home!” I don’t foresee this birthing a new series no matter how much the climax sets up future adventures for the women. But it’s not a total waste of time, and if you’ve got laundry to do or have a game of pinochle to play, having this one on in the background as ambient noise will likely do quite nicely. 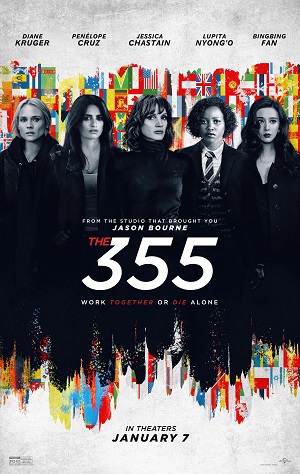