Pixar’s Lightyear is a bit strange. In some ways, it is as daring as anything the studio has ever produced, even up there with the likes of WALL•E, Inside Out, and Turning Red. In others, it’s nothing more than an innocuous, amusingly harmless trifle in the vein of The Good Dinosaur or any of the three Cars adventures.

The reason for this has everything with the conceit behind this animated sci-fi escapade. The idea fueling this interstellar effort is that “Lightyear” is the movie that Andy from Toy Story watched in the summer of 1995. It instantly became his favorite film, and so it’s no wonder he was so excited when he received a Buzz Lightyear action figure to add to his prized toy collection later that year on Christmas morning.

That means Lightyear is a crazy piece of epic lunacy in that it isn’t a Toy Story spinoff and it isn’t a continuation of the popular television series Buzz Lightyear of Star Command from the early 2000s. Instead, it is a movie inside a movie, one made to fit within the kid-friendly motion picture it is supposed to be a part of but also constructed to lovingly imitate similar genre efforts of the actual year in which it was supposed to have been released.

So it’s a little bizarre. But, because it is a 1990s-style action film, because it is purposefully something of a convoluted trick built upon an understandably creaky foundation, Pixar’s latest also doesn’t say or do a lot that’s innovative. It doesn’t make a lasting impression, and while it’s a heck of a lot of fun in the moment, days later I discovered that I was fondly giggling more about the fact it exists than about anything substantive.

While it has nothing to do with the quality of the film itself, there is also the slightly annoying fact that Lightyear, not Soul, Luca, or Turning Red — each substantially more ambitious ventures in which Pixar took big swings — gets a theatrical release, whereas those three were shuffled off to Disney+ as if they were forgettable afterthoughts.

That shouldn’t bother me. But I’d be lying if I didn’t admit otherwise, and it’s hard not to hold it against the studio that the film that feels more like a cute throwaway deserving of debuting on a streaming service is the one to end up on 4,000-plus domestic screens on its opening weekend.

Admittedly, holding that against the film is unfair. This flight of fancy can be a heck of a lot of fun. Director Angus MacLane (Finding Dory) and the rest of the creative team have come up with a fast-paced, visually stunning lark that audiences, especially younger viewers, are almost certain to enjoy. There’s enough artistic joie de vivre to make this jovial what-if scenario worthwhile — taking into consideration the impressively immersive sound design and Michael Giacchino’s (The Batman) thunderous score — on the biggest screen possible.

Trapped on a strange planet 4.2 light-years from Earth, Space Ranger Buzz Lightyear (voiced by Chris Evans) makes it his mission to get commander Alisha Hawthorne (Uzo Aduba) and the rest of his ship’s crew of scientists home no matter what the cost. But while each attempt to test a new hyperdrive system is five minutes to him, back down on the planet years pass. Hawthorne and the rest of Buzz’s shipmates make full lives for themselves, including getting married, having children, and building a thriving community, while his only companion is a mechanical cat named SOX (Peter Sohn).

In some ways, what is most impressive about all of this is that MacLane and company do make an honest-to-goodness 1990s action flick in the vein of Speed, Armageddon, Twister, or Con Air. It moves at the same breakneck pace. It takes fanciful leaps in logic that are as cartoonish as they are endearing. It presents larger-than-life characters who are allowed to be silly and heroic, often at the same time.

There’s not a ton more to add. Lightyear is nonsense, but it is frequently enthralling nonsense, and it’s hard for me to work up the energy to get all that annoyed at its shortcomings or missteps. Besides, even if it isn’t exceptional, Pixar’s latest is still a weirdly beguiling endeavor that’s far more creatively enterprising than it will get credit for.

To infinity and beyond? Hardly, but Lightyear does achieve liftoff, and that in and of itself ain’t too bad. 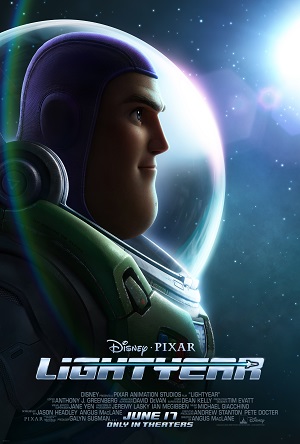