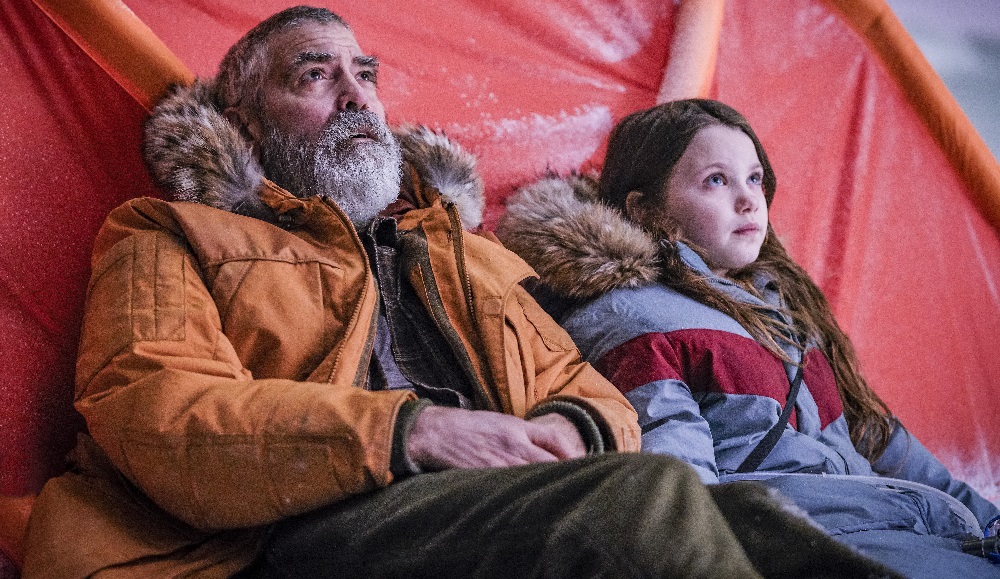 As a young man, astronomer Augustine (George Clooney) discovered K23, a distant planet similar to Earth he believes could sustain human life. Decades later, the greying scientist is stationed at a remote Arctic research station. Radiation is poisoning the planet; in a few short months it will be uninhabitable. With the remainder of the staff leaving to be with their loved ones, Augustine stays behind, monitoring the cataclysmic situation spreading across the globe by himself.

Led by their commander Adewole (David Oyelowo), the crew of the exploratory spaceship Aether is returning to Earth. They were sent to investigate K23 and find out if it truly is fit for human habitation. Their mission a success, the crack scientific team of Sully (Felicity Jones), Mitchell (Kyle Chandler), Sanchez (Demian Bichir) and Maya (Tiffany Boone) is eager to report their findings. But they have no idea how dire the situation is on Earth, NASA strangely unresponsive to all their attempts at communication.

Based on the book Good Morning, Midnight by Lily Brooks-Dalton, Clooney’s latest directorial effort The Midnight Sky is an ambitious end-of-the-world science fiction fantasy that will undoubtedly rub some the wrong way. It is a blatantly melodramatic saga of survival that wears its heart on its frozen sleeve, everything centered around a weary man’s last days hoping to right the one wrong he’s never been able to forgive himself for.

As moderately patriarchal as that all sounds, for some strange reason this film worked for me. Not every piece. Not every moment. But the ones that matter, the scenes most important to the outcome of the story, these noticeably moved me. I was caught up in what Augustine was attempting to accomplish and curious to learn if the crew of the Aether would survive. These storylines satisfyingly converged, and for the most part Clooney kept the excessive amount of treacle from smothering his motion picture.

The central engine propelling things onward is Augustine’s quest to contact the Aether to warn them about conditions on Earth and to urge them to turn the ship around and head back to K23 so humanity will survive. He’s joined in his mission by a mute girl named Iris (Caoilinn Springall) who appears to have been inadvertently left behind when their Arctic station was evacuated. Augustine becomes strangely protective of the child in a fatherly way even though he knows the world is ending, the two battling against the elements as they struggle to stay alive until they’ve restored communication with the Aether.

The pair quickly realize their radio transmitter isn’t powerful enough to reach the spaceship. There is a second Arctic station that does have the necessary capabilities, but to get to it they will have to cross the frozen tundra and risk exposure to both the sub-zero temperatures as well as an encroaching cloud of lethal radiation. They encounter numerous obstacles during their journey, including a pack of hungry wolves as well as the wreckage of a downed cargo plane.

On the Aether, the tireless crew has their own obstacles to overcome. A meteor field has taken out their communication equipment and Adewole, Sully and Maya will have to spacewalk to repair the damage. It’s a dangerous operation, and there’s the potential for a second round of meteors. But the crew needs to get in contact with the Earth, the continued radio silence an all-too-obvious sign that something is wrong.

Clooney has directed one perfect movie, Good Night, and Good Luck., back in 2005. His track record behind the camera since that Oscar-nominated gem, Leatherheads, Monuments Men, Suburbicon and now this, has been spotty at best. There is an over-reliance on coincidence as far as the plotting to this tale is concerned, and having things revolve almost entirely upon an older white man trying to redeem himself for foolish choices made during his youth doesn’t play nearly as well as I’m sure Clooney was hoping it would.

But the spectacle is spot-on. Whether it be the interstellar actions of the Aether crew during their dangerous spacewalk, or Augustine and Iris hoofing it across the Artic without knowing if their labors will pay any dividends, Clooney does a wonderful job of generating tension and excitement. Featuring strong visual effects, exceptional cinematography from Martin Ruhe (Run All Night) and a suitably stirring score composed by the great Alexandre Desplat (Little Women), the technical facets are strong. The director’s handling of these aspects is impressive, and I imagine this all would have played exceptionally well theatrically if there were open venues to showcase it.

The central twist that connects Augustine to the Aether isn’t difficult to figure out, and the climactic reveal as it pertains to Iris and why she was left behind isn’t altogether shocking. But my heartstrings were still tugged, and even if the contrivances required to bring things to a conclusion are a little obnoxious, I can’t work up the energy to get bent out of shape about it. If The Midnight Sky doesn’t shine as bright as maybe it could have, there was just enough sparkle to put a happy twinkle in my eye, and even with a noted absence of fuel Clooney’s latest still achieves emotionally cathartic liftoff. 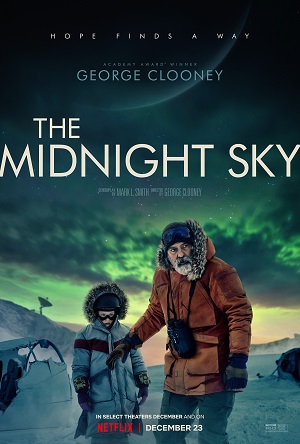