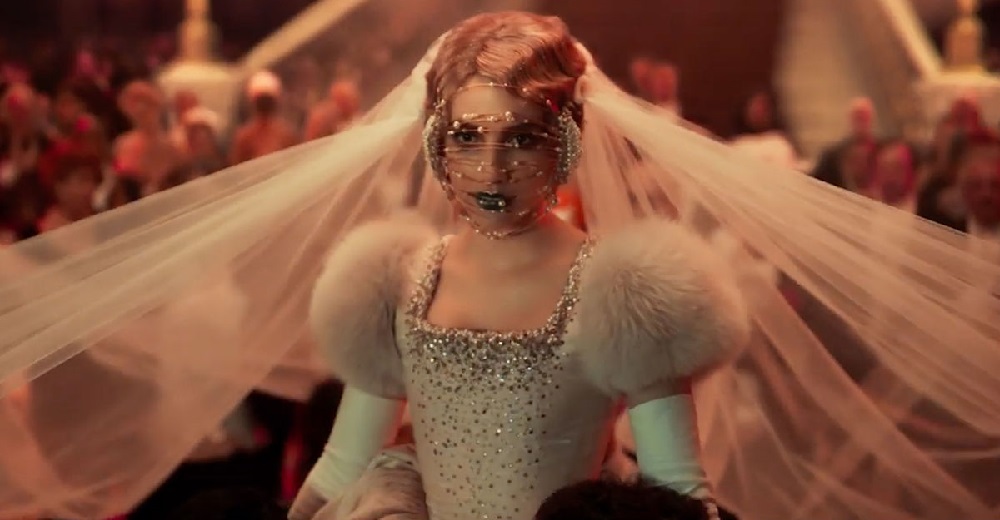 Uma (Emma Roberts) is the “Upper” daughter of a famed inventor and industrialist who died under mysterious circumstances. To ease their financial woes and to cement the takeover of their family’s company, her materialistic mother is eager for her rebellious child to marry the wealthy Son (Arnaud Valois) so they may continue to live in the comfort and serenity she has grown accustomed to. To help facilitate this, she sends her headstrong child to a strange, isolated island resort run by the mysterious Duchess (Milla Jovovich). Here, Uma and the other young women currently at this facility will be transformed, almost as if by magic, into the elegant, dainty, poised and subservient wives and mothers their benefactors are paying top-dollar for them to become.

But the Duchess’ island paradise isn’t just a finishing school for defiant young ladies. Along with singing star Amarna (Eiza González), sent to the resort because she had the temerity to sing new, controversial material outside of the songs she’s popular for, Uma begins to suspect something far more nefarious than a few classes in etiquette and a handful of probing psychological exams are going on. Making plans to escape, the pair are hesitant to tell their fellow classmates Chloe (Danielle Macdonald) and Yu (Awkwafina) too much about what it is they are going to do. Yet the Duchess isn’t easily tricked, and she’s up to the challenge Uma, Amarna, Chloe and Yu present, certain that by the time all four leave the island they’ll be the prim and proper young ladies she’s been paid to turn them into.

Director Alice Waddington’s Paradise Hills is nothing less than stunning to sit and look at. From a purely visual perspective, this strange, unsettlingly surreal fantastical psychological thriller is extraordinary, Alberto Valcárcel’s incredible costumes particularly noteworthy. But the sets are equally glorious, the look and feel of this disturbing island paradise one of a kind. This is a the type of movie I almost wish I could turn the volume off on just so I can go live and luxuriate in the wondrous images that are being splashed across the screen, and considering the filmmakers crafted all of this on a budget that was likely a tenth of what something like Maleficent: Mistress of Evil or Godzilla: King of the Monsters cost that’s honestly saying something.

As for the rest of Waddington’s feature-length debut? That’s more of a mixed bag. Borrowing heavily from the likes of The Handmaid’s Tale, The Stepford Wives and even The Hunger Games, working from the director’s original story screenwriters Brian DeLeeuw (Some King of Hate) and Nacho Vigalondo (Colossal) have delivered a scenario that plays more like Suzanne Collins meets Stephenie Meyer fan-fiction with a dash of George Orwell sprinkled throughout written by clueless adults more than it does anything substantive. All of the unique elements feel as if they are pulled willy-nilly from other sources, and because of that the only thing aspects that wholly dazzle are the aforementioned visual aesthetics.

Not that this makes Paradise Hills a waste of time. Far from it. The young cast is appealing, Jovovich has a couple of memorably unsettling moments that caught me by surprise (especially near the end) and the subtly evolving relationship between Uma and Amarna is far more tragically affecting than I anticipated. In fact, that facet of the scenario radiates with invigorating subtext involving concepts of unrequited love, gender nonconformity and especially conversion therapy that are haunting in their eloquence. These pieces of the tale are heartbreaking, and it is during the brief moments where it is just the two of them grappling with the frenzy of emotions they are trying to overcome  and understand more fully where Roberts and González mutually shine.

Awkwafina is wasted in a throwaway role but does get to deliver a powerful monologue right at the start of the climactic stretch that sums up the moral conflict at the center of the picture nicely. Macdonald fares a bit better as far as her character is concerned, but even she is something of a minor afterthought for the majority of the film’s running time, all of which makes caring about what happens to Chloe somewhat difficult. There’s also a subplot involving Uma’s secret boyfriend Markus (Jeremy Irvine), a member of the wrong social class whom her mother highly disapproves of, that goes nowhere, the twists involving him so brazenly obvious there’s zero suspense as far as his involvement is concerned.

Even if it isn’t saying anything new, I still do like what Waddington is going for in regards to her debut. There is a not-so-subtle subtext analyzing the dividing line between the haves and the have-nots that is especially relevant right now, and Uma’s budding realization that wealth and social status mean precious little as far as overall happiness and quality of life are concerned is reasonably well developed. There are also some nice statements as far as gender identity and equality are concerned, understated little beats that reflect how individuals of varied backgrounds and sexual orientations should be treated yet sadly so infrequently are.

These are lovely sentiments, and Waddington gives them the intelligently multifaceted discourse they deserve. But the actual thriller and mystery pieces, the primary components driving the story forward towards resolution, I didn’t find those to be as compelling as the more introspectively emotional aspects proved to be. There’s no tension as to where things are going to end up, the final images leaving me cold. While there’s the high probability that Paradise Hills will grow on me on re-watch, as magnificent as the visual elements are and as strong as the social commentary might be, that’s not near enough to overcome the places where this motion picture falls disappointingly flat. 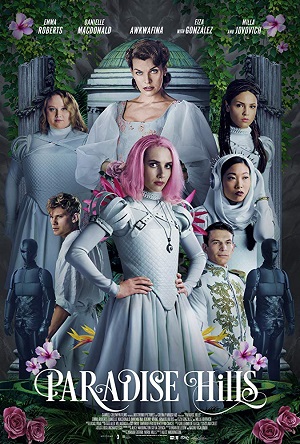