A SECOND TWENTY-FIVE (because I can)

Sam Mendes’ fearlessly immersive WWI spectacle is a stunningly shot marvel (courtesy ace cinematographer Roger Deakins) that forces the viewer into a thrilling first-person race against time and a horrifying trek across No Man’s Land.

A never-better Eddie Murphy as iconoclastic entertainer Rudy Ray Moore and the year’s best ensemble cast in a monstrously entertaining look at one of the most financially successful underground independent productions (1975’s Dolemite) of all-time.

László Nemes follows up his 2015 Oscar-winner Son of Saul with a masterful drama of a young woman returning to Budapest to reclaim her family’s honor and finds herself suddenly in the center of a political and social maelstrom that will lay the groundwork for the events of WWI.

15. Portrait of a Lady on Fire (D: Céline Sciamma)

Céline Sciamma’s powerfully multilayered drama of a young artist tasked with secretly painting a portrait of an unwilling bride-to-be only to find herself falling in love with her target is one of the more visually devastating motion pictures I’ve seen in quite some time. Actresses Noémie Merlant and Adèle Haenel are superb.

A ghost story, a psychological drama, a tale of demonic possession and a haunting feminist history lesson of life on the American frontier during the 19th century, Emma Tammi horror-western The Wind is a fascinating mood piece that burrowed under my skin and then refused to let go.

Martin Scorsese’s epic drama of gangsters, politics, professional killers and Jimmy Hoffa is a stunning, one-of-a-kind stroke of storytelling slow-burn bravado that only grows in tragic eloquence as it goes along. Robert De Niro, Al Pacino and a lured-out-of-retirement Joe Pesci are all nothing less than extraordinary.

Marvel Studio’s first adventure headlined by a female superhero was thankfully well worth the wait, star Brie Larson more than holding her own as the powerful intergalactic guardian Carol Danvers, a.k.a. Captain Marvel.

The year’s most critically acclaimed motion picture is a sly, carnivorously beguiling social commentary that explodes into home-grown terror and tragedy at the most unexpected of moments. Bong Joon-ho is a master filmmaker working at the top of his game.

Jen McGowan’s stirring thriller of a young college woman who makes a catastrophic wrong turn on the way to a Washington, DC internship interview on the eve of Thanksgiving is a minimalist marvel that only grows in restlessly captivating power as it goes along.

Sebastián Lelio’s remake of his own 2013 Chilean smash refuses to play it safe follow step-by-step its predecessor’s footsteps. Julianne Moore gives a rich, heartbreakingly sincere performance that borders on unforgettable.

Samara Weaving is a force to be reckoned with, dominating the screen with emotionally ferocious intensity. With a wittily crafty script and featuring creatively nimble direction from Matt Bettinelli-Olpin and Tyler Gillett, this gory little treat is an absolute hoot destined to achieve cult-favorite status.

For my money the Vietnamese import Furie was the best pure action film of 2019, Veronica Ngo making for a spirited heroine whose talent for one-on-one violence is only magnified by her feral motherly determination to reunite with her recently kidnapped child.

Greta Gerwig’s innovative adaptation of Louisa May Alcott’s classic, much-filmed source material is one of the year’s most delightfully endearing surprises, her nonlinear approach to the material helping to make the novel’s themes feel fresh and timeless for the 21st century.

Even without the jaw-dropping, single take 3-D final hour, Bi Gan’s Long Day’s Journey Into Night would still be an essential piece of cinematic poetry deserving of applause. With that final hour it might be a gosh darn masterpiece. Only time will tell.

29. A Beautiful Day in the Neighborhood (D: Marielle Heller)

Empathetic and incisive in its highly personal familial observations, Marielle Heller’s A Beautiful Day in the Neighborhood isn’t so much about Fred Rogers as it is a celebration of all it is he quietly stood for. Tom Hanks is sensational.

Ritesh Batra’s stirring, heartfelt Photograph is a magnetic romantic snapshot of individual longing and human understanding that’s a rapturously intimate pleasure that sadly ended up as one of the year’s most underseen gems.

Chris Butler’s Missing Link makes me smile. It makes me feel happy and euphoric as few other films were able to accomplish in 2019. It is a visually inventive sensation that also happens to sport an insightfully progressive script that’s nothing short of perfect.

Hark Triton, hark! That crafty ol’ Robert Eggers, he beguile ye viewers with a sneaky crag of a psychological horror yarn that’s a crackin’ good’en I found impossible to resist.

A gorgeous red dress that fits everyone and anyone who wears it also sets them on a path to certain death in writer/director Peter Strickland’s highly original horror opus, and in the process casts a demonically enthralling spell upon the viewer that’s insidiously unnerving.

Gorgeously animated sequel that also builds and expands on the ideas explored in such rapturous detail in the 2013 original film, this adventure with sisters Anna and Elsa is once again a celebration of sisterhood and self-determination viewers of all ages are almost certain to enjoy. The songs are pretty great, too.

I was arguably in the bag for a thriller where alligators attack Floridians during a hurricane before I stepped into the theatre, but just because that’s the case that doesn’t make Alexandre Aja’s bloodily vicious creature-feature Crawl any less wonderful. This horror tale has bite. Literally. 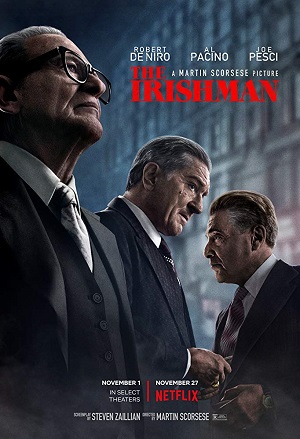